Join us on Thursday, July 13 as we bring you the first of four live events in the 2017 Overwatch World Cup Group Stage. Our initial stop takes us to Shanghai, China, where only two of the eight participating teams will secure spots in the round of 8 at BlizzCon.

But before we open this new chapter in competitive Overwatch, let’s take a quick look back at the past.

In last year’s Overwatch World Cup, Team South Korea solidified their position as the final boss—no one came close to their finesse and mastery of the game’s mechanics, and in the grand finals, the previously undefeated 2016 Russian squad fell apart in the face of South Korea’s superior play.

Fast-forward to today, and we’re amazed at what a difference a year can make.

2017 has seen the rise of new challengers, as some of the most talented players in the west competed skilfully and showed their strength against the best South Korea has to offer in Overwatch APEX. Meanwhile, across the globe, teams from Europe, the Americas, Asia, and the Asian Pacific levelled up during tournaments in their own regions. Together, they have grown stronger, and are ready to face each other— and challenge last year’s champions—in the 2017 Overwatch World Cup.

The 32 qualified nations have been divided into eight groups of four, with two groups set to battle in each of the four corners of the globe. In the group stage, they will compete in a round-robin format, each team playing the other teams in their group once. The top two teams from each group will then play the top two teams from their partner group in the regional event. Each winner from these two matches will advance to the Overwatch World Cup round of 8 at BlizzCon in November.

The Overwatch World Cup tournament will commence with Group A & B in the Shanghai Group Stage. 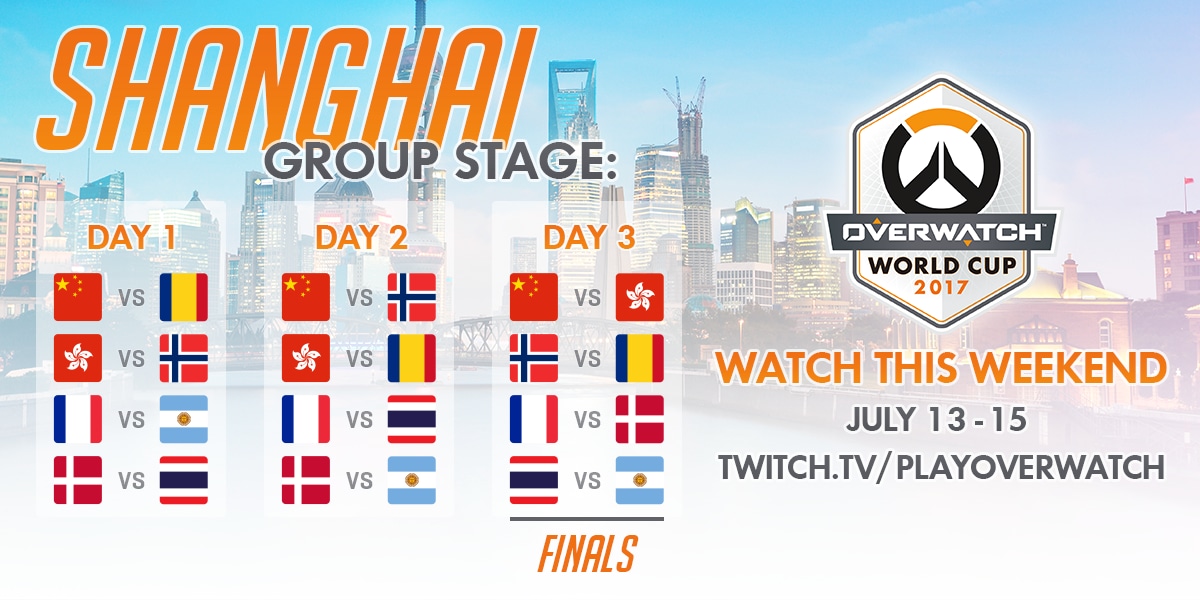 First up, there’s Group A: China, Hong Kong, Norway, and Romania. Team China, a hybrid of the LGD Gaming and iG.Ice squads, will have the home advantage as they compete in the first round-robin of the tournament. For Team Hong Kong, keep your eyes on Kin-Long ‘ManGoLongJai’ Wong —he’s a strong flex player with incredible situational adaptability.

If you’ve been watching Overwatch Contenders, Team Norway will have some familiar faces, since their roster includes players from Team expert, Toronto Esports, and Ninjas With Attitude. They’ve been scrimming regularly together against other national teams in the lead-up to this World Cup Group Stage, building their synergy and their confidence. Rounding out Group A, Team Romania have also been scrimming heavily in preparation for Shanghai. Their team features Mihail Cristian ‘Meza’ Paunescu of the Bazooka Puppiez—his team made the Overwatch Contenders European semifinals and they took out fan-favorite Misfits in the quarters to get there, so this guy is no slouch.

Also competing in Shanghai is Group B: France, Denmark, Thailand and Argentina. Team France, which comprises the entire roster of Rogue—one of the few Western teams to compete in Overwatch APEX in South Korea—will be a force to be reckoned with. The people of France are “avec le 6,” and will be cheering loudly and proudly for their national team.

Team Denmark will be looking to make an impact—Mads ‘Fischer’ Jehg from Hammers Esports will have to show that he can adapt with his five Team Singularity teammates if they want to have any hope of getting out of this group.

Next, Team Thailand, featuring the biggest smile in Overwatch: Pongphop ‘Mickie’ Rattanasangchod. Representing Thailand at the Overwatch World Cup last year changed his life—he showcased his infectious personality and incredible talent then, and he returns this year as a proud member of Team EnVyUs, one of the most successful non-Korean professional teams on the planet. We’ll see if his fairy tale continues in Shanghai beginning July 14.

Finally for Group B, Team Argentina. They qualified for the World Cup Group Stage just ahead of Thailand, so although their squad is not as well-known globally, their collective local talent was more than enough to get them through regional tournaments. Argentina could well be a dark horse in this group, but they’re up against some of the strongest competition in the world.

Head to worldcup.playoverwatch.com for more information—it all kicks off this weekend. Don’t miss it!