Come one, come all, get ready for the Bandlewood Brawl! The month of September is upon us, a truly exciting time for the passionate fans and players who make up Runeterra’s competitive scene. A celebration of Runeterra’s best players will take place this upcoming weekend as the first-ever World Championships event unfolds, but the fun certainly does not end there!

With the return of LoR Masters Europe on the following weekend, it’s time to announce and congratulate the 48 players who have put in a herculean effort over the past 3 weeks to elevate their countries to the top of the rankings, proving they deserve a spot among the very best in Europe for the third edition of LoR Masters Europe – Chronicles of Bandlewood.

Over the course of the past three weeks, we’ve seen the European ladder enter a frenzied state of competition. With the launch of Runeterra’s final region, Bandle City, the announcement of the third iteration of LoR Masters Europe and the upcoming Worlds Qualifier tournament, we’ve seen some of the brightest minds in Europe embark on an exciting journey to prove not only that they are amongst the best of the best, but also innovative deck-builders and meta-solvers. It’s no surprise with over 100 new cards added to the game and so much at stake, players have been tested on multiple fronts.

In the end, the three-week race has left us with a fairly defined meta where many of “Beyond the Bandlewood’s” newest cards have quickly risen to the top. Sion’s Fallen Warriors, Nami’s Cosmic Aquarium and Bandle City Mayor’s Treehouse Troupe have been some of the stars of the show. However, players have quickly proven that a wide variety of off-meta strategies are certainly viable, and the diversity of deck-building strategies have been electrifying to witness.

The top sixteen players on the European ladder representing a unique country on the final deadline of the qualification period have earned themselves the title of “Team Captain”, securing their country a spot in the LoR Masters Europe: Chronicles of Bandlewood main event. They are joined by the second and third highest ranked representatives of each qualified country to complete the teams.

The 48 qualified players and their final placement on the ladder are as follows:

The final day of the qualification period was as climactic as expected and with incredible storylines developing all throughout the final hours. Poland’s competition was especially fierce, with a final push from ShogoPASS resulting in a frantic struggle that resulted in the top 3 polish players occupying the top 8 spots in Europe. Leaving fan favourite Alanzq out of contention. Powerhouse nations such as Germany and Spain also sealed their ticket to the group stage, with household names such as Teddy314 making a repeat appearance, and Spain’s entire roster from the Chronicles of Shurima tournament making a return.

Among the surprises, we see Gouda ddy’s dominating performance on the ladder since the very start of the season, leading Morocco to its first qualification to a LoR Masters Europe tournament. Czechia’s original squad from the very first iteration of LoR Masters Europe also makes a return with a team composed of Pokrovac, Bajatak, and TomasOW it is sure to be among the favourites to take it all next month. The reigning champion, Turkey, also managed a strong showing and secured a top 3 spot, but in this case without the leadership of its previous team captain, GRANRODEO.

Among the usual suspects, we see the depth of national competition once again securing qualification for countries such as France, Belgium, and Russia, with notable returns from Norway and Romania who were present in the first-ever LoR Masters Europe but missed out on the last edition. Among the notable exclusions; our first ever Champions, Portugal, as well as last edition’s finalists, Finland.

The final four groups for the upcoming LoR Masters Europe: Chronicles of Bandlewood were finalised as soon as the final ladder snapshot was taken, as well as the calculations regarding qualified players and country seeding. See below:

Below is what was taken into account to decide the groups following the changes made in the last edition of LoR Masters Europe (seeding and group finalization process):

a) Countries qualified to the tournament based on their highest LP player, referred to as the captain, and the seeding of the countries was decided via an average calculation of LP among the country’s top three players. With the new rule change requiring all qualified players to be in Masters, there is no longer a need to assign a 0 LP score to non-Masters participants.

b) Once LP averages are calculated for each country and a more accurate assessment of strength is made, countries will be placed in one of four groups depending on their seeding following a “snake-type” system as seen below: 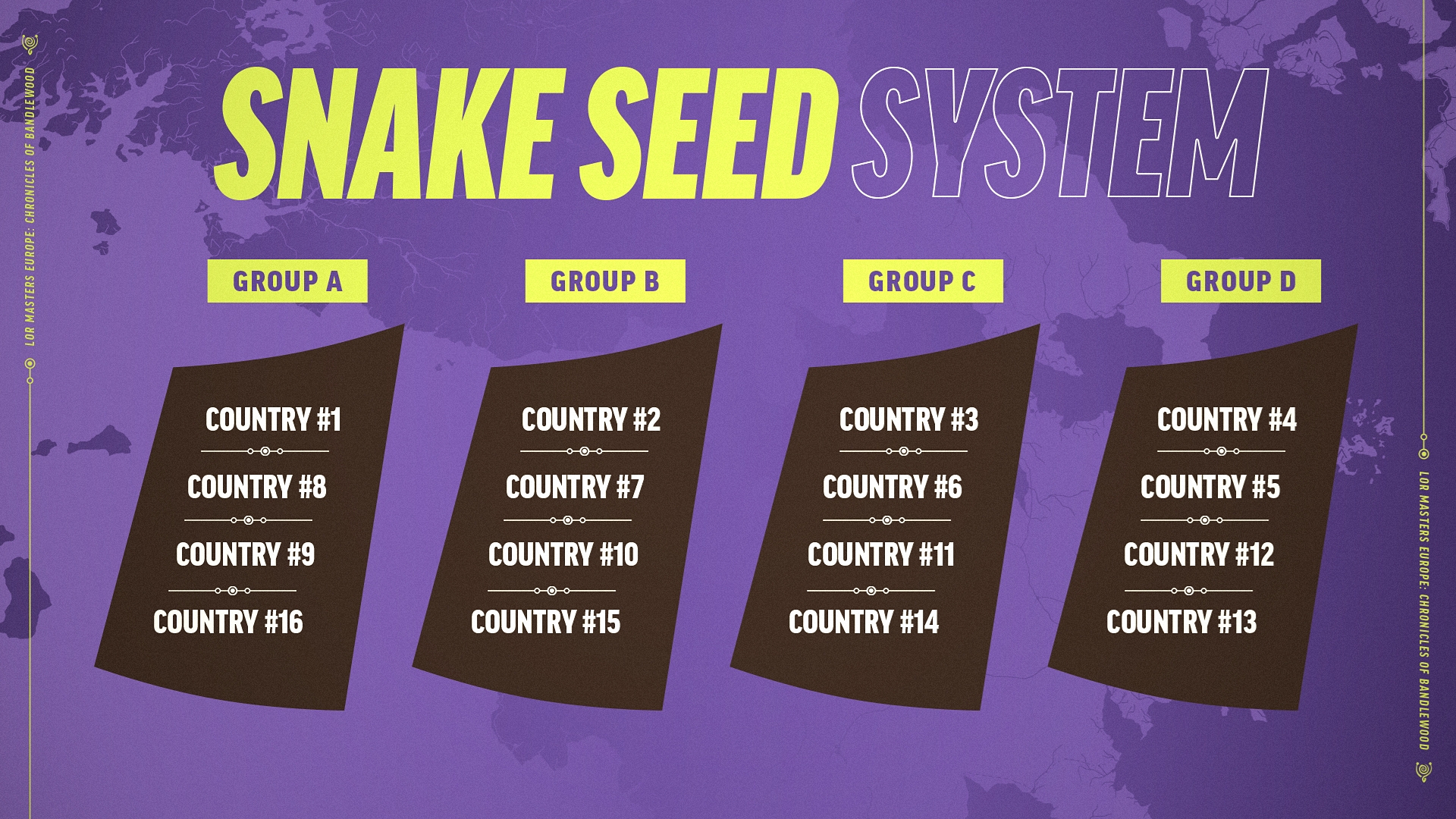 Now that the ladder qualification phase has concluded, the 48 players will start the final preparations alongside their fellow countrymen for the Group Stage phase, which will span from September 23rd to October 1st. The relevant changes made in the last edition of LoR Masters Europe will remain, including the seven deck lineup alongside the adjustment to two bans per team.

Throughout the pick and ban phase before the start of each match, teams will reveal the champions of each deck and will take turns making bans. Teams can bring a specific champion in up to two separate decks, but they must take into account that if that champion is banned, two of their seven decks will be banned in the process, making it so teams will have anywhere between 3 to 5 decks available to choose from for their best-of-three matches in the Group Stage phase.

The innovative 3v3 tournament series follows a unique multi-weekend approach, with players expected to battle it out throughout the end of September and the start of October. However, due to scheduling challenges imposed by the jam-packed celebration of competitive play across Riot’s multiple titles (TFT Worlds, LOL Worlds, and the next LoR Seasonal), this third edition of LoR Masters Europe will have a slightly altered format:

As a quick reminder, following the Group Stage phase, the top two teams in each group will advance to the quarterfinals. The championship bracket will be a single-elimination tournament with 8 teams, with quarterfinal matches being best-of-3. All matches on the final day of competition will be best-of-5, including the grand finale to crown the Champions of LoR Masters Europe: Chronicles of Bandlewood.

All the action will be starting next week and we hope you’ll tune in and experience the best competitive play the European region has to offer!

More information about regional broadcasts will be shared on our social media channels and the official LoR Masters Europe website.