Performance improvements and overall client health is our highest priority for the game right now and will be our primary focus for the next few months. This is something that’s been on our radar since the release of Core Set 2020 back in July, however, the improvements and changes we’ve made have not been enough for many of our players.

Since the release of Throne of Eldraine, we’ve increased the number of developer resources dedicated to finding and fixing the underlying problems. Today, we want to give you more insight into what we’ve discovered so far and what we’re doing to solve it.

Last week, we released a patch to address crashes that players may have experienced when playing on a device with an integrated GPU. We’re continuing to keep an eye out for any additional reports.

Since the September game update, we’ve seen increasing reports of players experiencing a “black screen” when attempting to reconnect to a match (players can hear gameplay sounds, but only see a black screen until their timers run out or they fully restart their client).

A fix for this issue is currently being tested, and we hope to have it resolved with the October game update.

Based on player logs and internal reports, this appears to be related to how our asset database handles finding all the things necessary to display a card in Magic: The Gathering Arena. This goes beyond card animations or particle effects: textures, shaders, rule hangers, artwork, even the size and shape of cards when they’re in your hand, on the stack, on the battlefield, in your graveyard, etc. This is why players may experience these issues outside of matches, such as during sideboarding, drafting, deck building, or opening boosters.

Magic is the most content-intensive CCG in existence, and as we grow MTG Arena, we need to scale the capacity of our asset system to accommodate this. We’ve identified the necessary improvements we need to make to our asset system, however, resolving this is going to take some extensive code refactoring and time.

Colloquially known as a “memory leak.” We have identified certain assets which are not being correctly cleaned up between games, which increasingly bogs down performance the longer you play. This is currently our primary lead, and we are working toward a solution but will continue to investigate as there may be other causes.

There are hundreds of factors that can lead to performance issues, further complicated by variations in computer configurations and hardware. This is why player reports are so important. Please continue to submit support tickets with the following information whenever you experience performance issues:

These reports fill in the gaps that sometimes we can’t see, and they are vital to this process. Without your help, we would still be trying to find a viable solution to those gameplay crashes that are now fixed.

Again, we want to stress that improving our game’s performance and overall stability is our highest priority right now and will continue to be our highest priority until we get the needed results. This is on us to solve, and we’ll do whatever is necessary to ensure a better experience for our players.

Beyond what we’ve outlined above, we’re also exploring other options (such as IL2CPP) for additional performance improvements. All of this is going to be a lot of work—which is why we’re on the lookout for an additional six software developers, with more openings coming soon. Think you can help? Apply!

Though we had previously announced that this feature would be coming with the October game update, we have decided to delay this feature for the time being. As noted above, our priority right now is focusing on performance improvements and client health, and we didn’t want to risk adding a new feature until we’ve made more progress in that area.

We also know that this is one of our most highly anticipated features, and we want to make sure we do it right.

For those of you looking forward to this, we apologize for the delay. Everything we had previously announced for our social features remains on the roadmap (friends messaging, friend deck sharing), with the goal to expand these features beyond that (eight-person drafts, spectating, four-player formats, etc.) when the time comes.

Okay, so now for the exciting things. 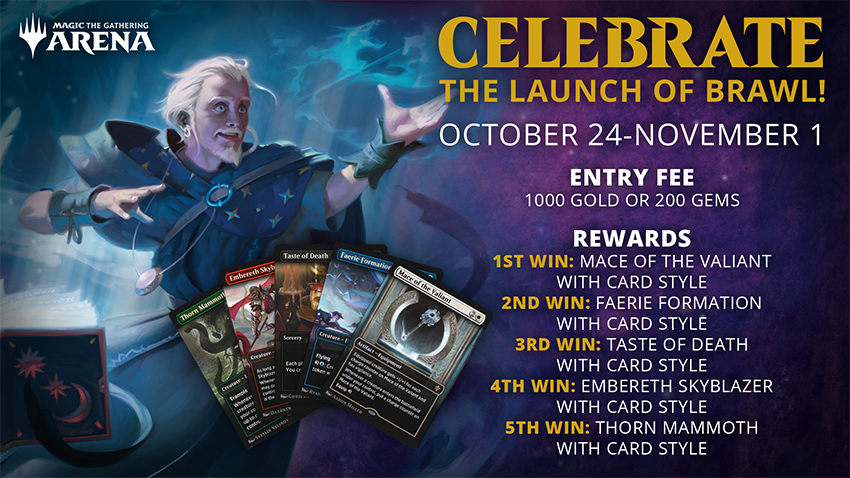 With the October 24 game update, we’re officially adding Constructed Brawl to MTG Arena. We will be celebrating with a special week-long Brawl event, where you can win a copy of five rare cards and their respective card styles. These cards were previously only available in MTG Arena through Wildcard redemption, as these cards were built for brawling and are not found in booster or Limited packs.

These rewards can only be earned once, but don’t worry—you can continue playing in the event beyond five wins. 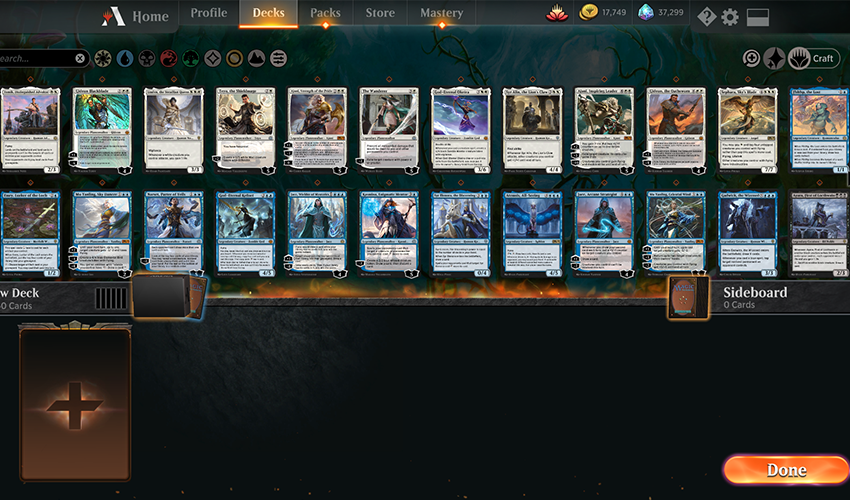 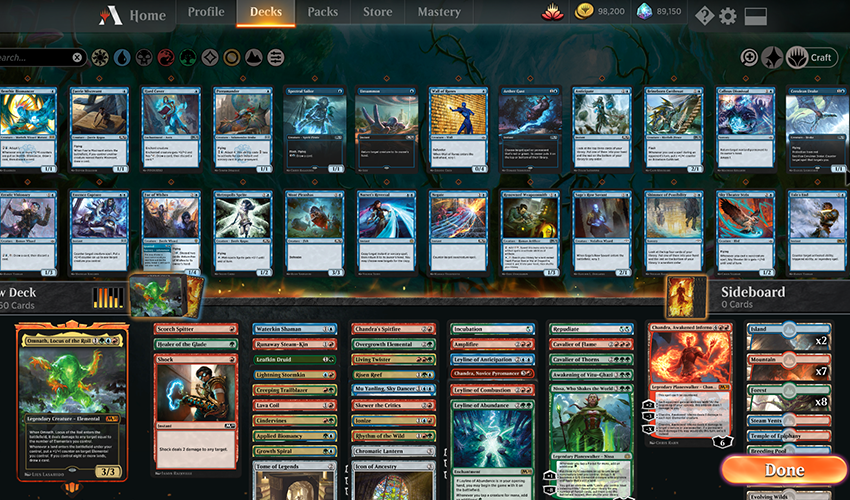 And for those of you interested in sharing your deck ideas, here is an example output of the what a Brawl deck exported from MTG Arena will look like.

Beyond our Brawl launch event, there will be a Brawl play queue every Wednesday, starting on November 6 at 8 a.m. PT (16:00 UTC) and available for 24 hours. Like our other Standard play queues, there will be no entry fee and no additional rewards, but games will grant quest progress and contribute toward any daily or weekly win counts.

If you need more Brawl in your life, it will also be available all the time through direct challenge, and be sure to check out your participating local game store for Magic Weekend: Brawl (Psst! Don’t forget that if you participate, you’ll be sent a code via email with more MTG Arena rewards!)

And for those of you who have been wondering when the Throne of Eldraine showcase cards will be in Magic: The Gathering Arena, the answer is[nbsp] . . .[/nbsp] soon! Starting in November, we’ll be hosting the Festival of the Fae event series, where you can earn some of those whimsical card styles for your collection. 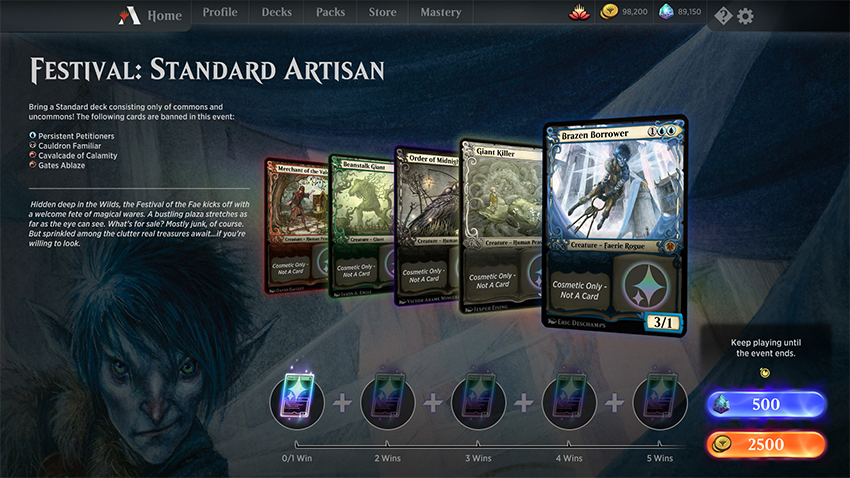 Each event will have a 2,500 gold or 500 gem entry fee and will feature the following formats:

To learn more about these formats, you can check out our event details page. Mark your calendars, because the festivities begin on November 3 with Artisan! For those who’ve done the math, three events with five card styles leaves more room for Adventures, and you’ll find the remaining showcase cards available for purchase through the in-game store. 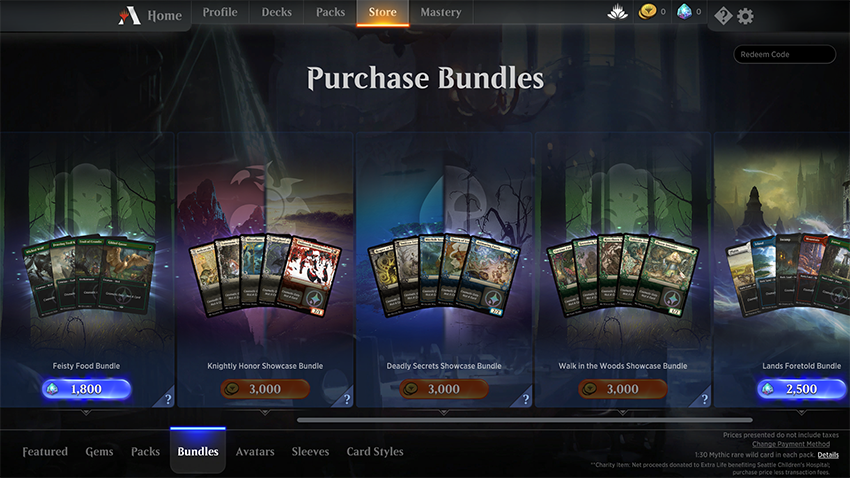 These Adventure bundles will only be available until our November game update, though, you will be able to buy each showcase card style separately at a later date.

And no, this doesn’t involve us removing it from weekly win rewards either. We’re adding 25 XP to daily win rewards for the first ten wins of each day as another way to help players catch up with their leveling if they missed out on a few quests or didn’t always finish their weekly wins throughout the first month of the Eldraine Mastery Pass.

Brawl, Throne of Eldraine showcase cards, and new events will be arriving on October 24, alongside some quality-of-life changes, bug fixes, and continued work on performance improvements. Keep an eye on our status page for the full maintenance schedule and follow us @MTG_Arena for the latest information.

Last, but not least, be sure to tune into twitch.tv/magic all weekend long for Mythic Championship V, where our Magic Pro League faces off against some of the top MTG Arena players for the $750,000 prize pool!