Welcome to the Legends of Runeterra open beta! Let’s dive into everything new we’re implementing to get LoR ready for open access and the very first Ranked season—Beta Season.

For a more visual take on what’s arriving with the open beta (including some adorable guardian animations), check out our open beta announcement video:

Since last year’s preview patches, we’ve reset all account progression (for the last time!) and made a variety of wide-ranging changes to LoR’s overall economy, impacting everything from the relative cost of coins to how much experience you’ll receive from wins. These changes deserve an article of their own—check it out for all the background and details. If you’re new to LoR or just want the tl;dr, here’s the short(er) version:

From the start, our goal was to create a card game with enough strategic depth and interaction to support skilled competition. Now it’s time to see where you stand among the best players in Runeterra: the open beta is bringing Ranked mode to LoR.

Your rise through the ranks starts with the Beta Season, which will last until launch. At the end of the season, you’ll earn a Beta Season-exclusive icon based on your highest tier reached to commemorate your first climb in Ranked LoR.

Being in a totally open beta means you need to see who’s online and  available to play. Check out the new social panel which features your friends list, friend chat, and the ability to challenge a friend to a match.

As a note, you can friend and chat with anyone on all three current LoR shards (Americas, Asia, and Europe), though challenges are within-shard only. LoR’s friends list & chat are built on a different service than challenge, and are shared between our games (i.e., with LoL), while challenge & matchmaking is game-specific. While we’ve made specific improvements to support cross-shard friends & chat, LoR does still have distinct shards (though fewer, bigger ones than LoL), which means separate challenge & matchmaking pools.

We’ve added a new Collections tab where you can completely personalize your gameplay experience. To start, you can check out the first new boards (one for each current region) and guardians (three more to join the original Poro). There’s a ton more to come in the future, and you’ll be able to collect, select, and swap it all right here. 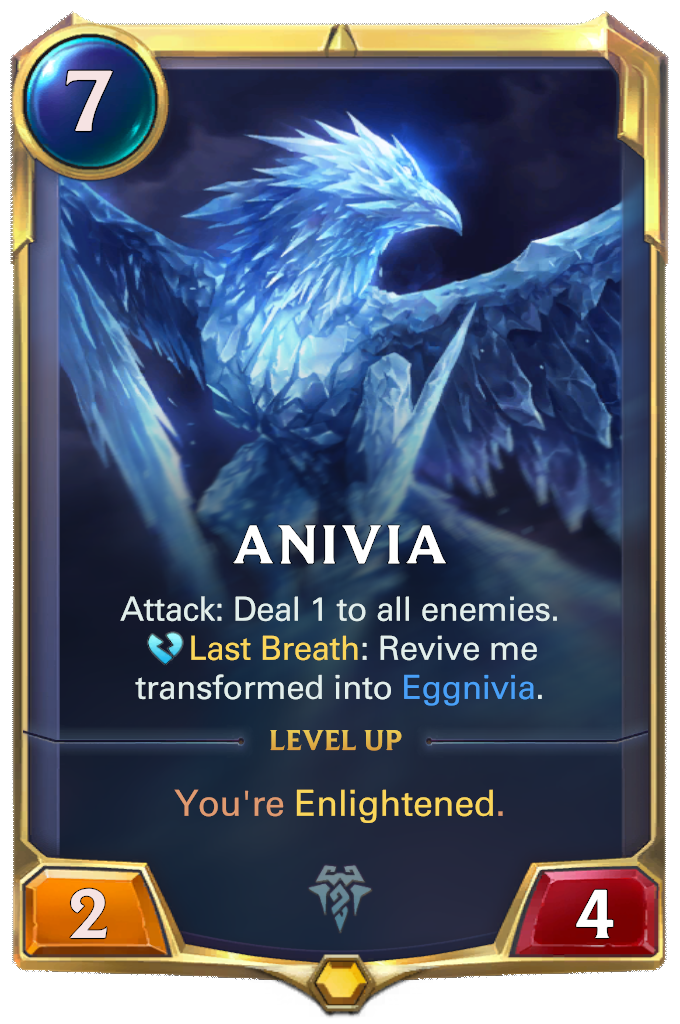 Based on internal playtesting and the first two preview patches, we found Anivia was in a pretty bad spot, especially when players went all in on building their deck to exploit her strengths. Often, she could be leveled up with almost no chance for the opponent to interact. With these changes, we’re preserving her copy / sacrifice synergy while giving opponents a more consistent opportunity to react. Also, by reworking her to fit into an Enlightened deck, we think she’ll have a clearer role as a control / ramp finisher. Finally, we heard feedback that Anivia’s design felt a bit off thematically, particularly in her inability to block, so we’ve removed that trait and adjusted her stats to support both an ice-wall feel and a roadblock playstyle that better synergizes with her abilities. 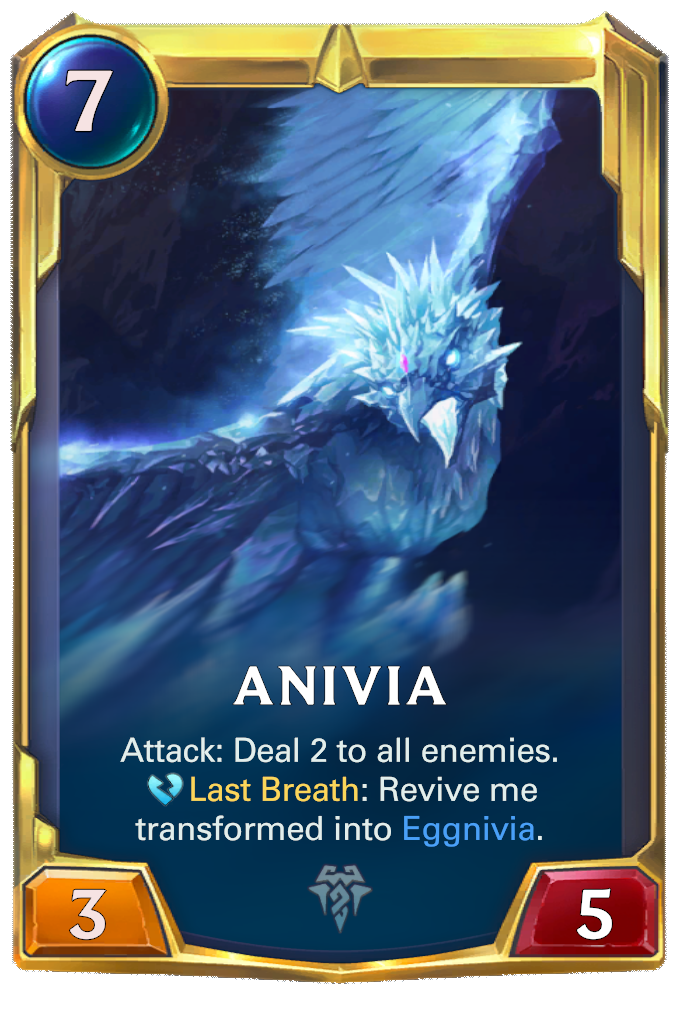 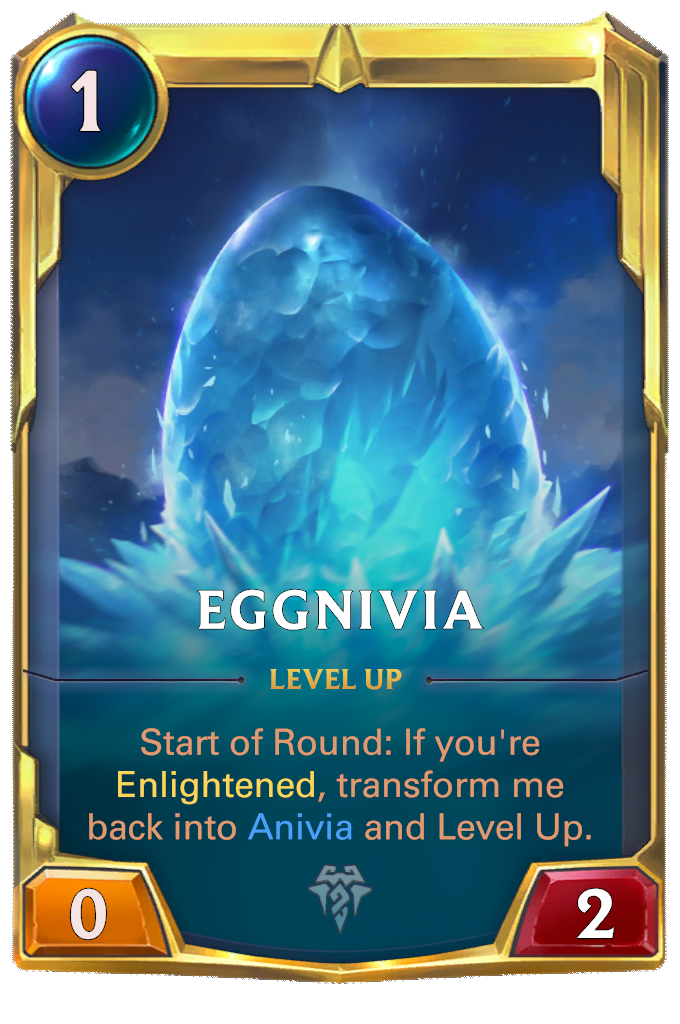 OLD TEXT: Can’t Block. Level Up: Start of Round: Transform me back into Anivia and Level Up.

NEW TEXT: Level Up: Start of Round: If you’re Enlightened, transform me back into Anivia and Level Up. 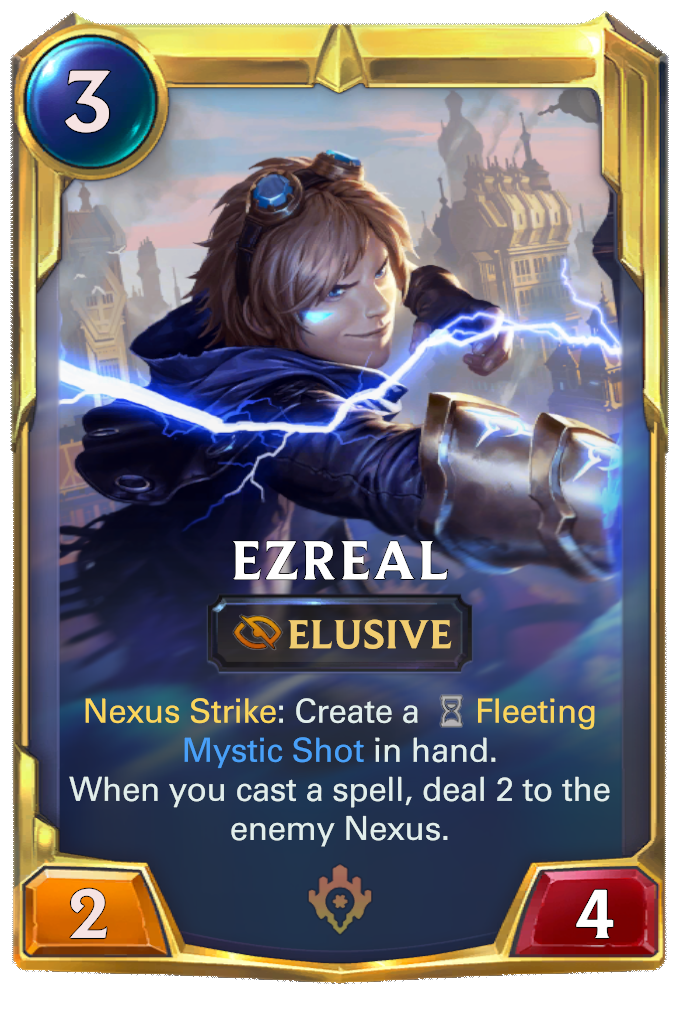 NEW TEXT: Nexus Strike: Create a [Fleeting] [Mystic Shot]. When you cast a spell, deal 2 to the enemy Nexus.

Ezreal’s level up was slightly too consistent at immediately ending games, so we wanted to add a bit more suspense to the “is this it” moment that comes when he hits Level 2 without impacting his power level overall. Leaving the mana cost on his fleeting Mystic Shot won’t impact him early while keeping his late-game spell slinging a true display of skill. 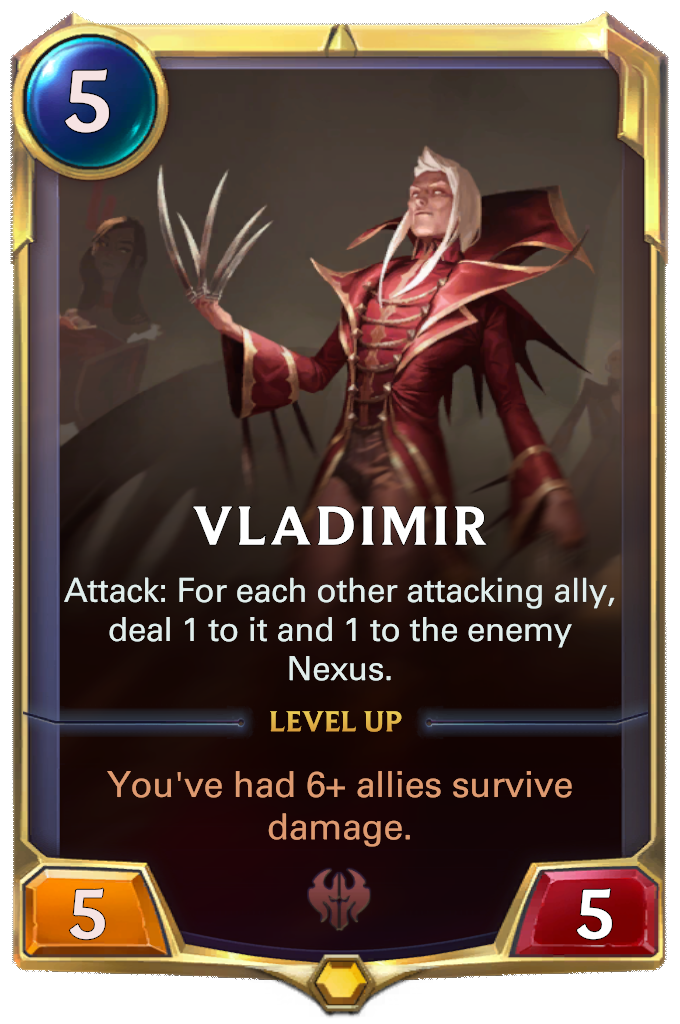 OLD TEXT: Level Up: You’ve had 6+ other allies survive damage.

Vlad’s level-up progress was weirdly inconsistent across copies of himself. This small buff corrects that issue. 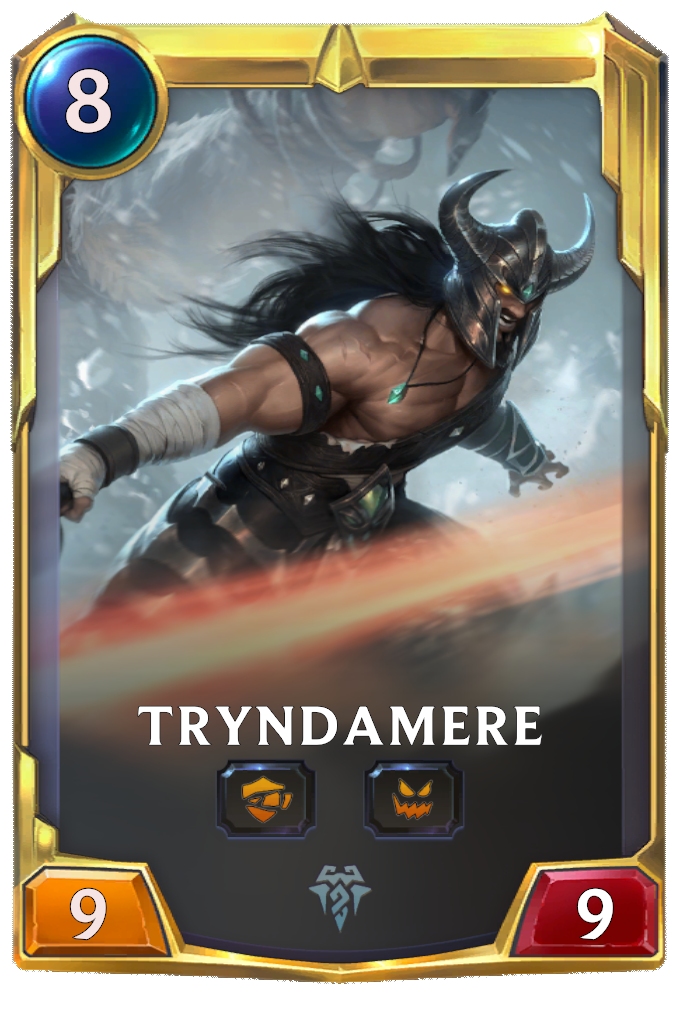 Tryndamere was just a tad too difficult to deal with at Level 2 and constrained the window of interaction to deal with him, especially when “cheated out” with Thresh or ramp spells. Removing Tough should give midrange decks a better shot at interacting with him, and make the Barbarian King a bit less tyrannical in Expeditions. 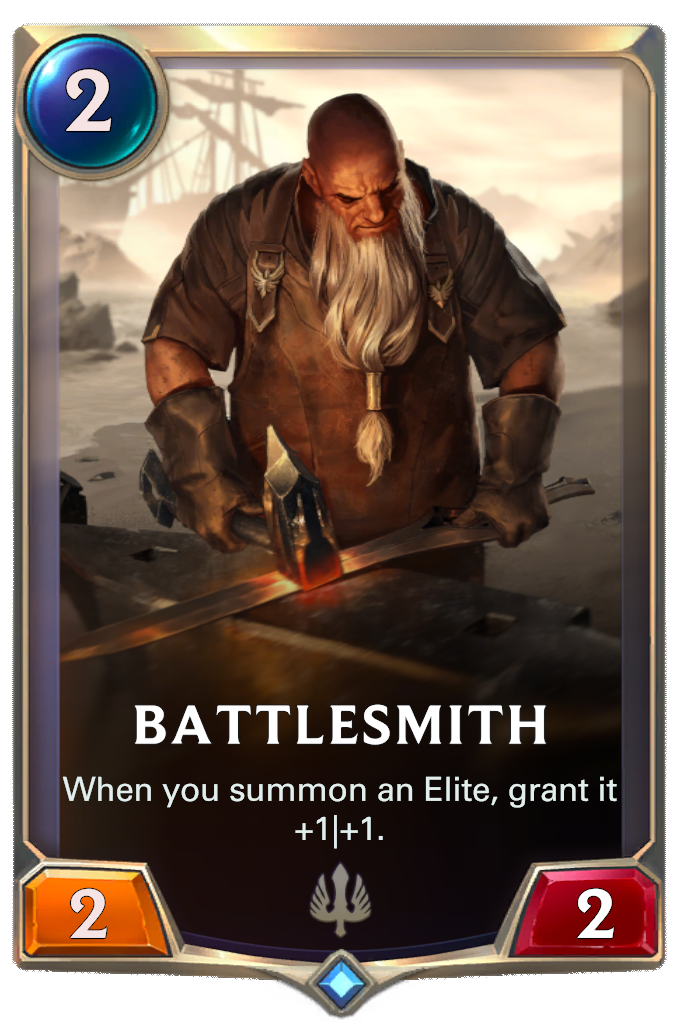 This change is aimed at Expeditions, where Demacia and the Elites archetypes in particular have been overperforming. This patch’s content reset also makes now an ideal time for using a rarity adjustment as a balance lever rather than stat / effect tweaks. To preserve rarity balance in Demacia, we’re also moving Silverwing Vanguard from Rare to Common. 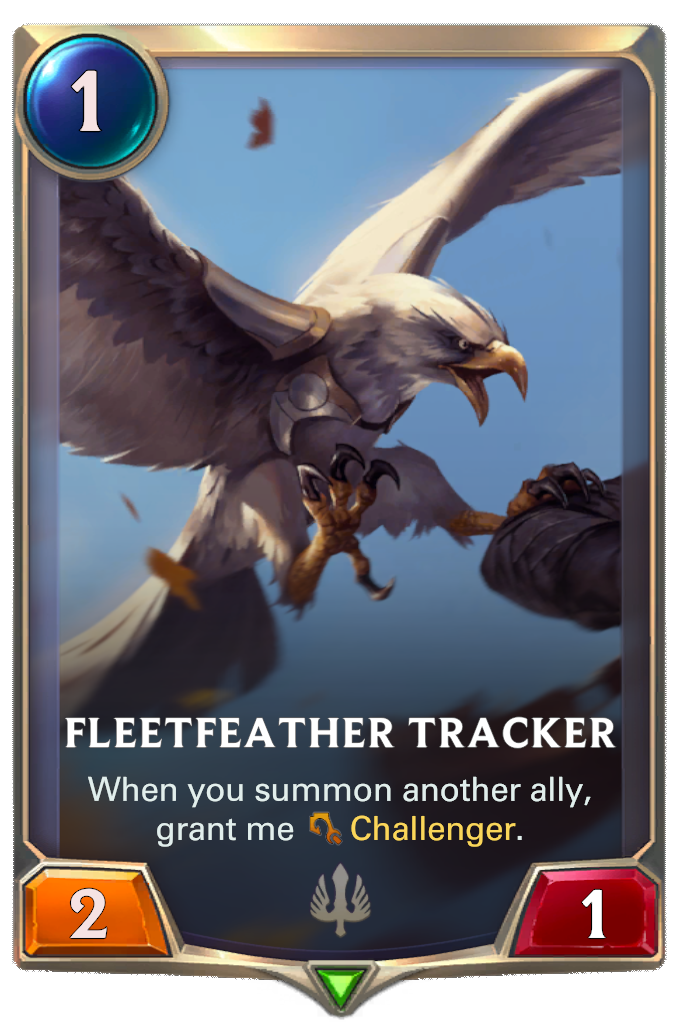 NEW TEXT: When you summon another ally, grant me [Challenger]

Tracker is a slightly-too-frequently-used unit, setting a risky bar for Demacia one-drops. Given the utility of cheap Challenger units, we’re making you work a little to turn on the bird’s power. 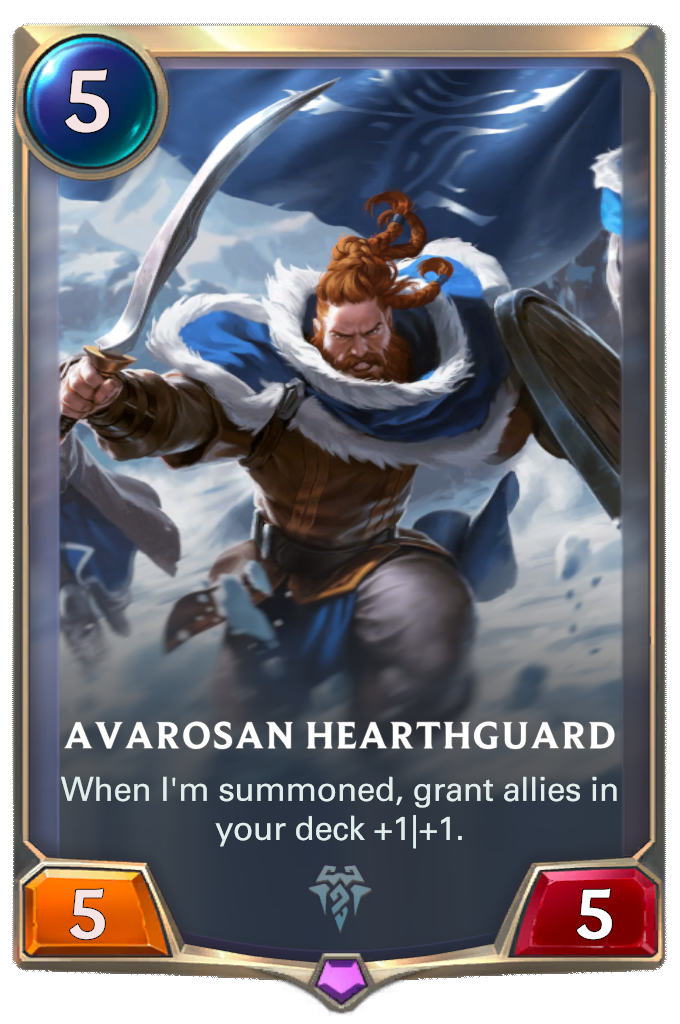 Hearthguard was quietly one of the best things you could do in your ramp deck—a big blocker, credible attacker, and long-term value generator. We’re preserving its more intangible power while reducing its health to give opposing units a better chance at going toe-to-toe with a unit that’s already generating so much off-board value. 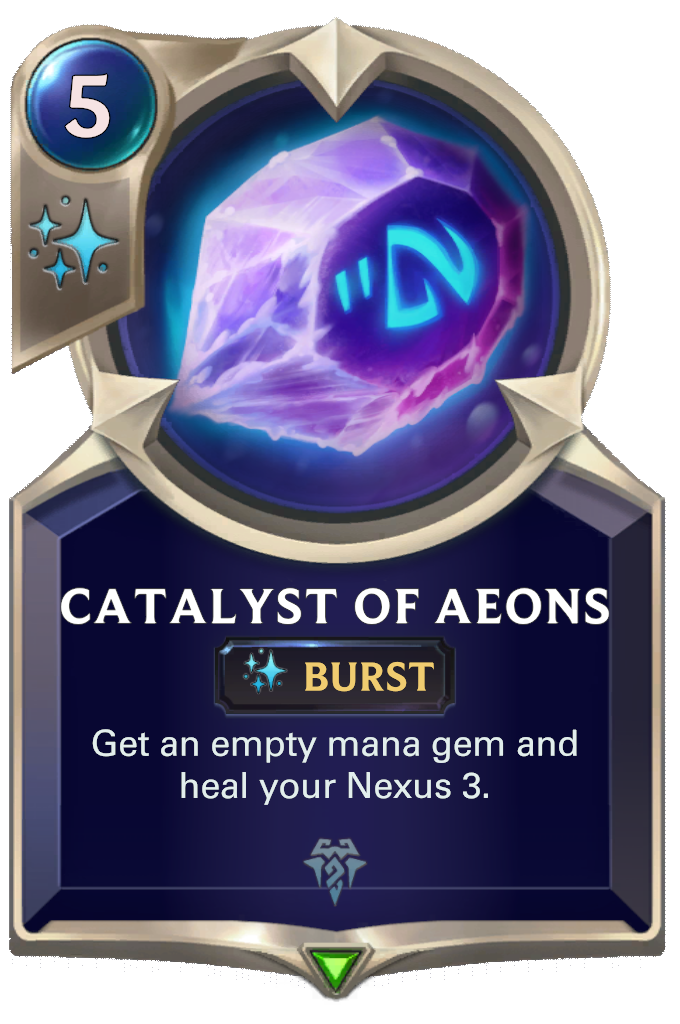 Catalyst just offered too much ramp and sustain at 4 mana, allowing it to consistently fit the curve ramp decks want on turn 3. Bumping it to 5 provides time for opposing decks to interact with the ramp deck, and more room for us to add tools to ramp decks in the future. It also better differentiates Catalyst from Wyrding Stones, ideally making the inclusion of both in a deck more of a choice and less of an auto-include. 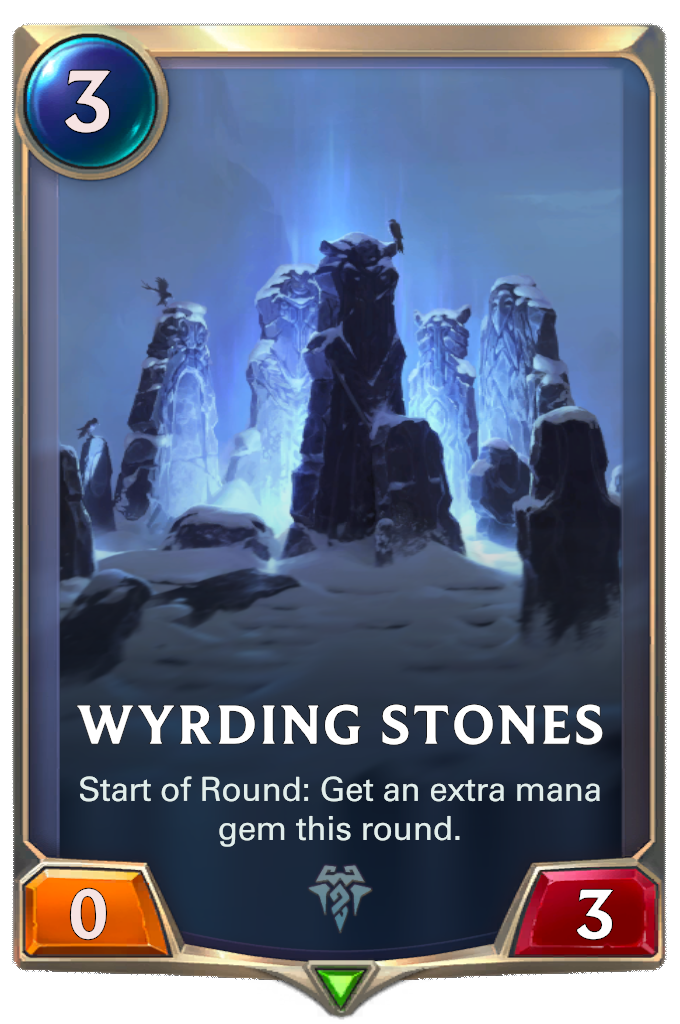 When we reduced the power of some key cards in ramp decks during the last preview patch, we gave Wyrding Stones a compensatory bump to its health (in addition to increasing its cost). 4 health is a significant breakpoint for surviving at least one combat though, especially since ramp decks should naturally fall behind early, so we’re reverting the health component. 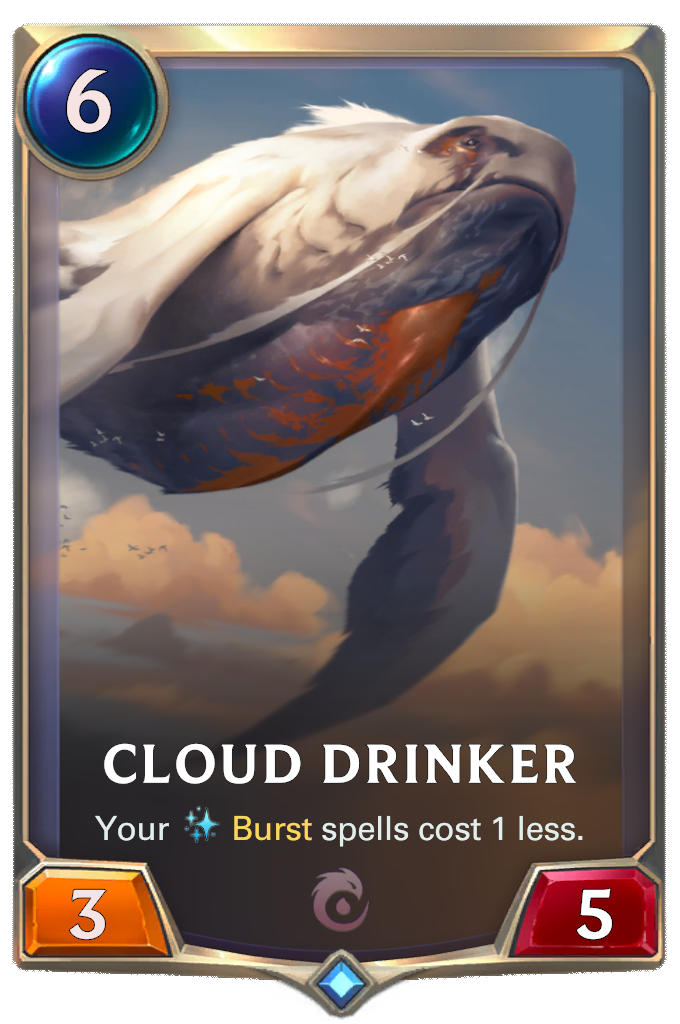 Cloud Drinker is a dangerous combo piece, but it was doing too much by also acting as a huge blocker to defend the combo strategy, so we’re reducing its health. We’re also removing the “super” effect at Enlightened, which was risky long-term (potentially enabling infinite / game-ending combos) without offering much to existing Enlightened strategies. 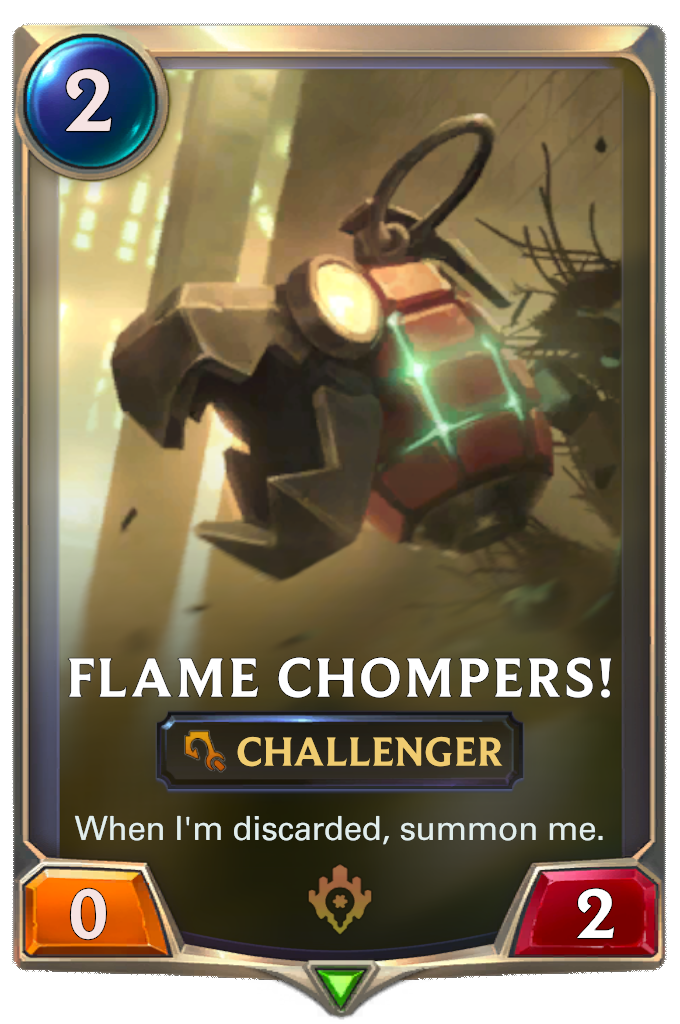 Our previous nerf to Flame Chompers (dropping its health to 1 from 3) was intended to make sure it would really only get to tie up one enemy unit without assistance. However, ol’ Chompers has ended up a tad too unimpactful at 1 health (particularly in Expeditions), so we’re splitting the difference. 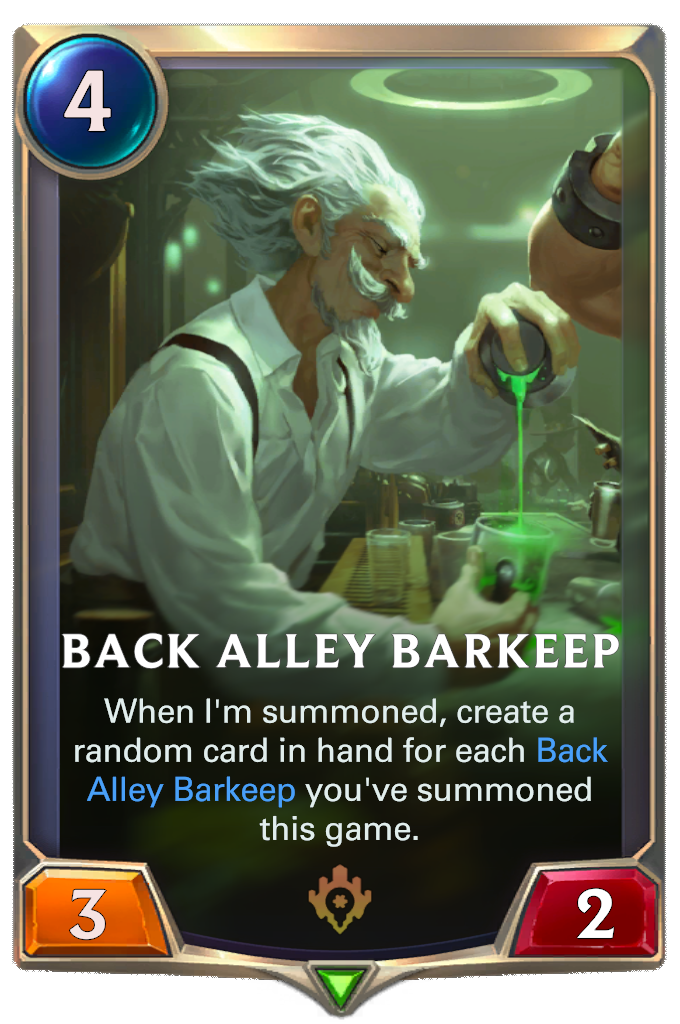 This context covers both Back Alley Barkeep and the rest of the Piltover & Zaun cards below: P&Z has been struggling in Expeditions, and we’ve got some buffs to some specific, underperforming cards that should increase P&Z’s consistency in Expeditions without undue impact outside the mode. 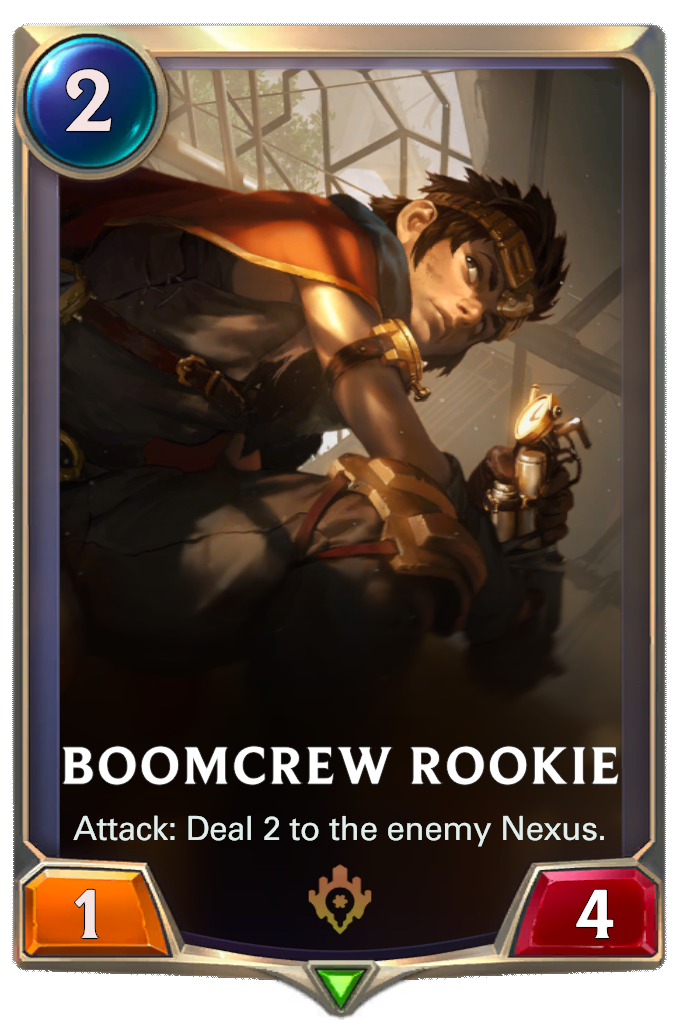 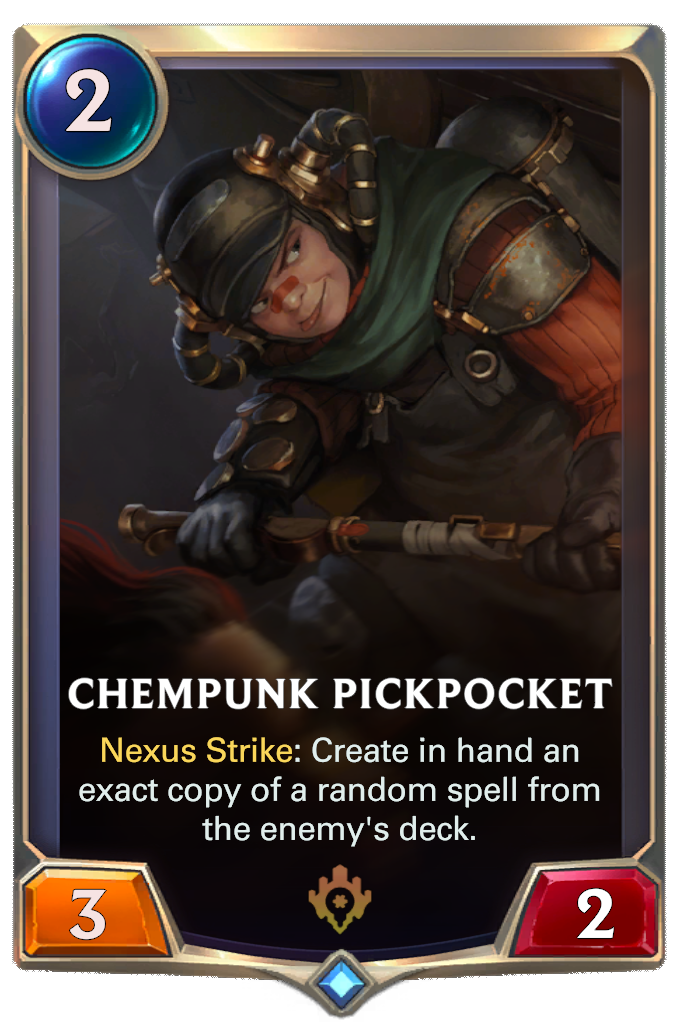 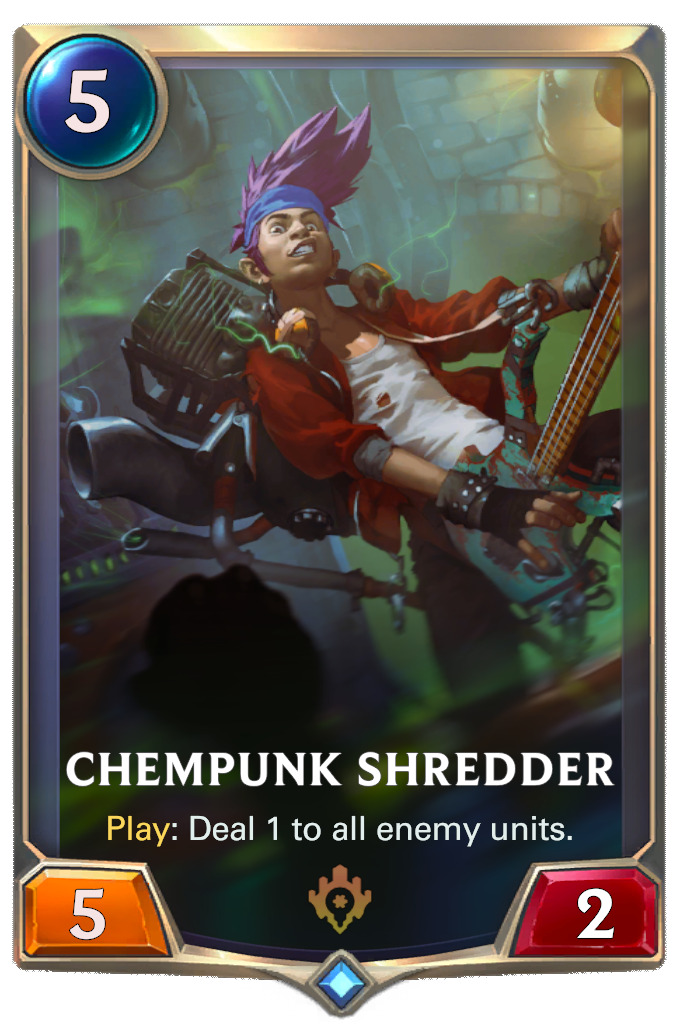 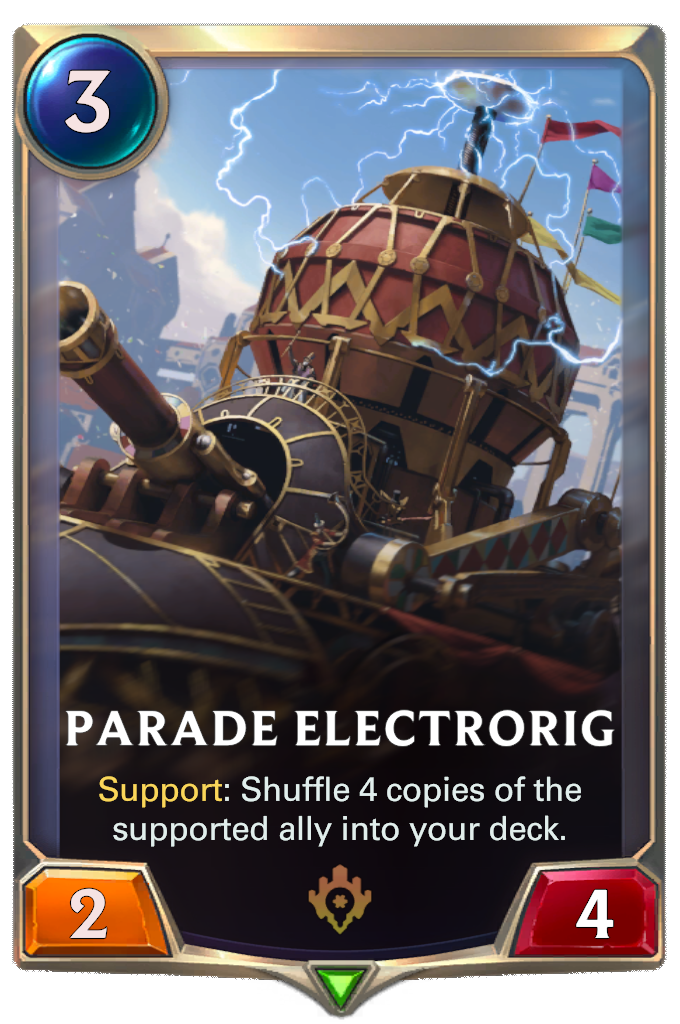 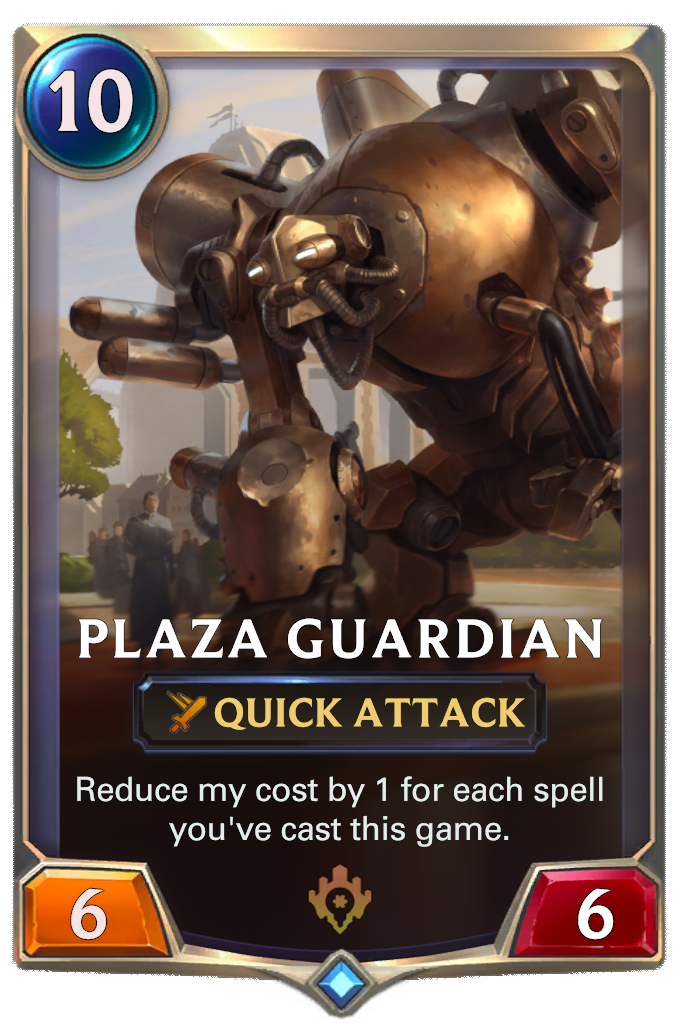 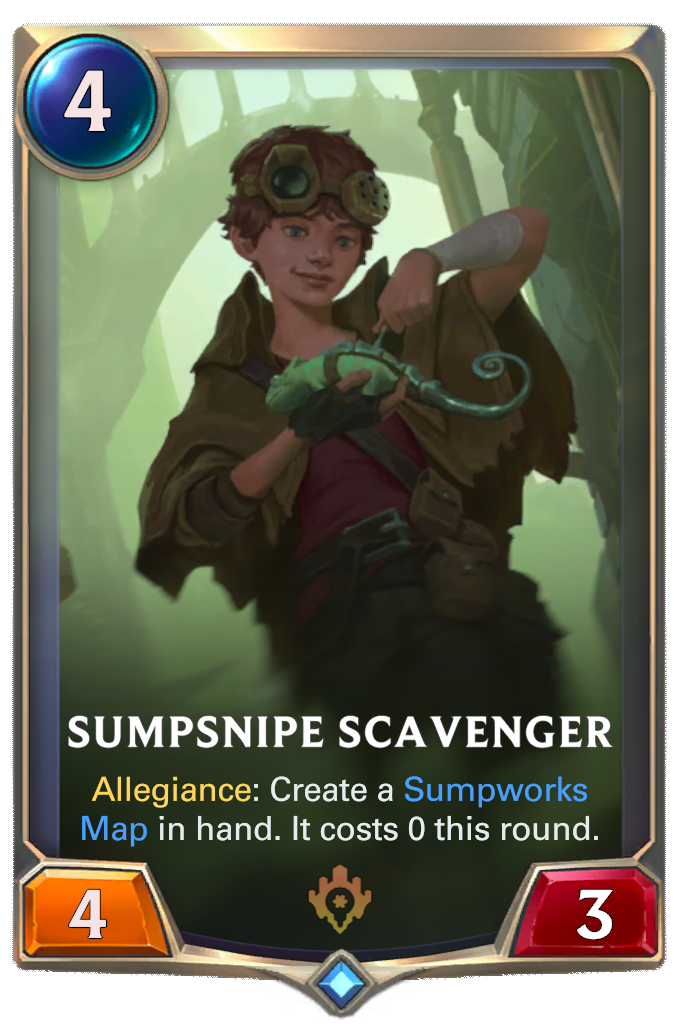 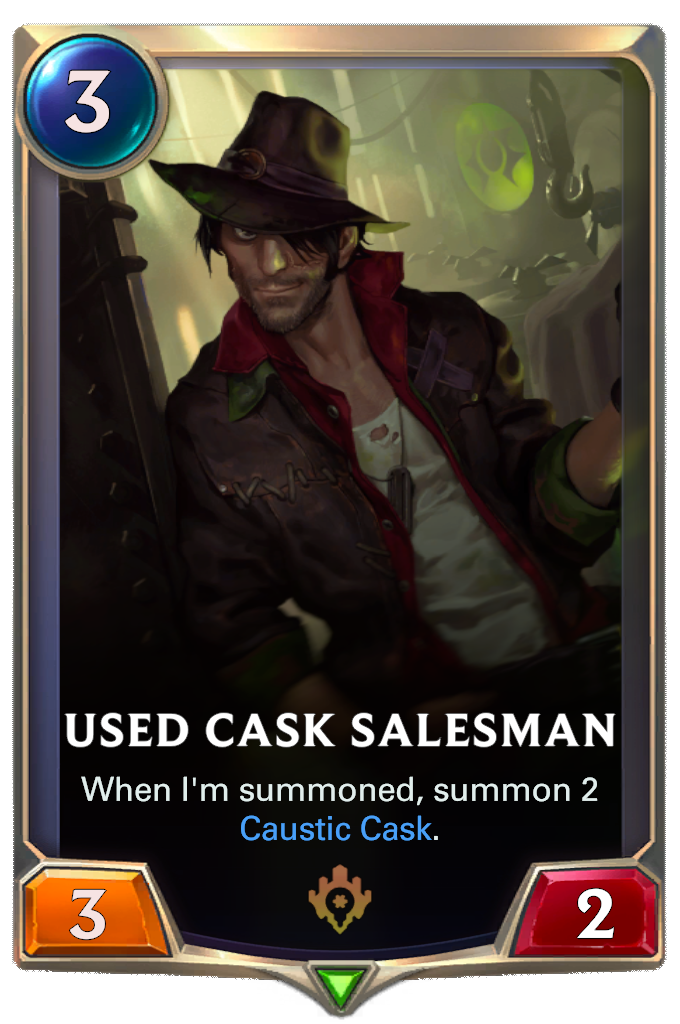 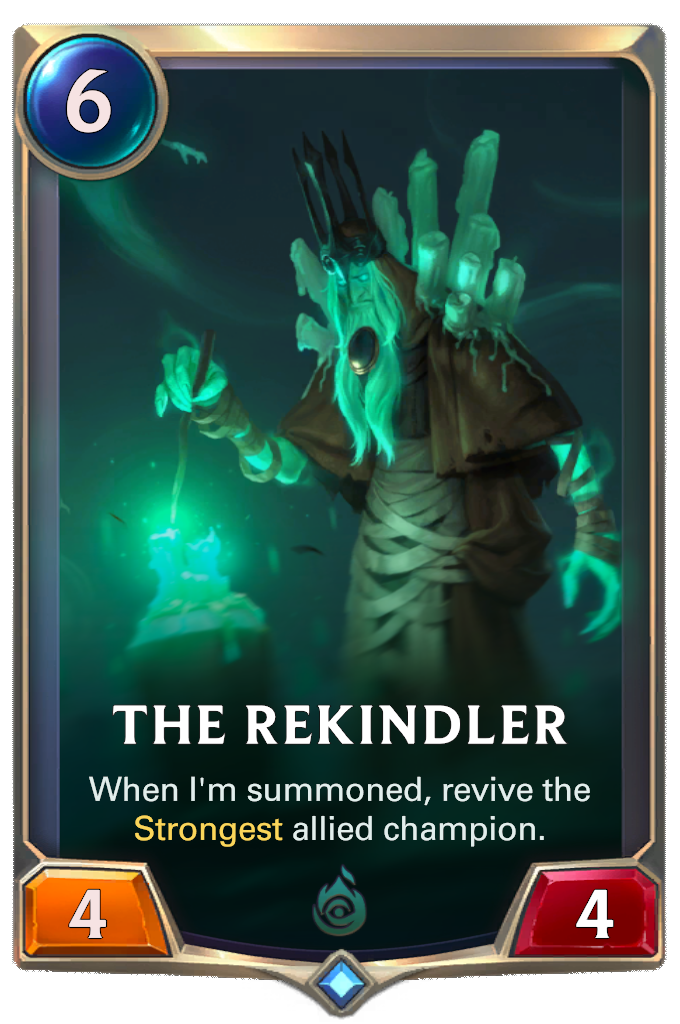 Just a straightforward power reduction—getting a champion back doesn’t need to come with quite so strong a body for the cost. We’ve also adjusted the text for clarity. 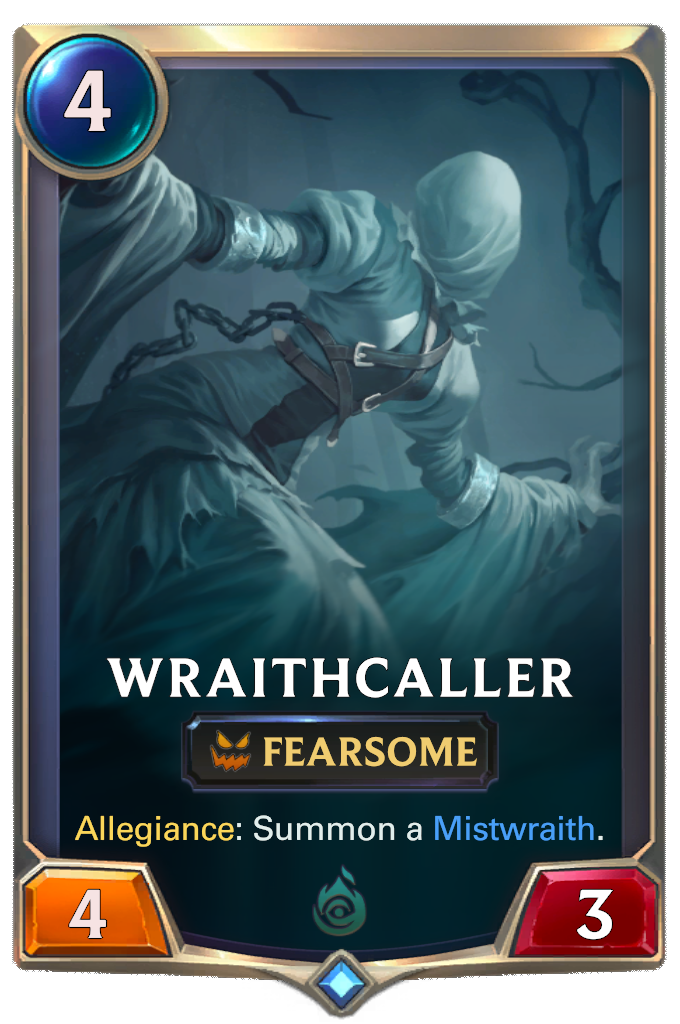 Mistwraiths are pretty fun, but the deck is a little weak. We hope buffing Wraithcaller will make the dedicated Mistwraith deck a bit more satisfying and powerful to play.

This is where we talk about stuff we think might need tweaks based on our play data and internal testing, but are still evaluating if or how to update.

Deny (and a dash of Elusive)

Deny is a key card that helps keep LoR an interactive game, but its sheer efficiency can also create the opposite effect—making it hard to interact favorably against decks that play it. This is obviously the whole point of Deny, but it can be particularly problematic in conjunction with strategies that demand prompt interaction in order to survive (such as Elusive-heavy builds).

We’re currently exploring potential changes to Deny that would maintain its role, but in a more balanced way. One option is increasing Deny’s mana cost, but there are obviously significant implications to bringing it out of the “can be cast with only spell mana” range.

Regarding those previously mentioned Elusive strategies: we’ve seen them be quite strong (though not definitively out-of-line), but it’s difficult to identify exactly which cards are potentially problematic. Just removing Elusive from units doesn’t necessarily help, since the keyword actually increases in power if it appears less frequently across competitive decks (less incentive to bring the right removal, and fewer Elusive blockers). We’re continuing to keep watch, and we’ll take exploratory action if we 1) determine it’s necessary, and 2) find a good candidate through internal testing.

Something we consistently heard during the preview patches was that our UI widgets for round initiative and the attack token were a bit too confusing (swords everywhere!), so we’ve combined them into a single new widget located in place of the old attack token.

As we mentioned last patch when adding the ability to see a deck’s champions with the in-game deck inspect panel, one of our long-term goals is increasing excitement and strategic interaction around the champions each player chooses to bring to a match. This patch, we’ve got two new features aimed at further highlighting champion choices as well as level-up progress during matches.