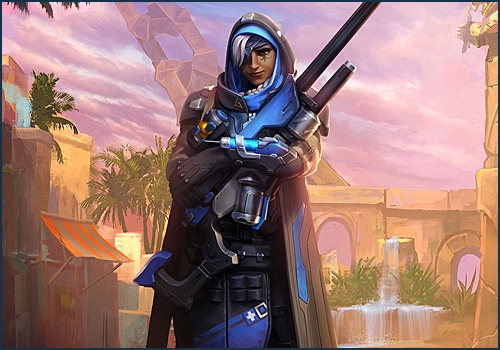 As a founding member of Overwatch and one of the world’s best snipers, Ana Amari uses her skills to protect the innocent. Though she went MIA after losing her eye, Ana’s sense of duty and responsibility has brought her back to the fight.

Developer Comment:  We’ve heard feedback on the lack of strength the Assault Trooper mercenaries possess. We hear and agree with this sentiment so we’ve increased their overall damage to make them more of a threat.

Developer Comment:  This change is aimed at making the flow of picking up items from mercenary camps smoother and more intuitive. We found the flow of defeating a mercenary camp, capturing it, then channeling on the dropped item was disruptive to what players are accustomed to with typical mercenary camps.

Developer Comment:  Thanks for all of the early responses on Volskaya Foundry. We’re making this change in response to consistent community feedback.

* Developer Comment:  Prior to this patch, crowd control effects on vehicles were reduced by 50%. Initially, displacement effects affecting vehicles were not reduced at all. Over time, we’ve made the decision to make some abilities unable to target vehicles. As our hero roster grew, so did the amount of special rules associated with vehicle interactions. Instead of continuing to maintain a list of special interactions, we’ve opted to simplify the behavior and make vehicles Unstoppable. To compensate for the increased vehicle strength, we’ve also looked at each vehicle’s balance numbers.

Developer Comment:  We made a few changes to our resident Ghost – mostly targeted at fixing some under-performing talents. Alongside that, we figured that we may as well point Anti-Armor Shells, you know, into a direction more befitting its name.

Developer Comment:  These changes are designed to increase the power of Insight and Transcendence by shifting more of Kharazim’s healing power pie into them. We want to encourage the same active gameplay that Iron Fist Kharazim’s have, but increasing healing and utility instead of damage when the other Talents are chosen.

Developer Comment:  We’d like to make positioning for Rehgar’s Chain Heal matter more, so that we reward players and teams that can get the most of it. To do this we’re reducing the range and radius of the heal, while also making the jumps a greater portion his overall healing.

Developer Comment:  To her credit, Johanna has not needed many changes since she was first released into the Nexus. Her talent pick and win rates have been fair compared to most heroes, and she has almost always had a place in the meta. While she is not in dire need of changes, we saw an opportunity to spruce up her talent tree and give her some more interesting options to choose from on various tiers.

New Bundles – The following new Bundles and Skin Packs are available for a limited time!