Di seguito andiamo a vedere tutti i dettagli in merito.

Last week Modern Warfare brought a new Operator to the field, Ronin, and a free access weekend to Multiplayer for free-to-play Warzone players. This week add a new weapon to your arsenal – the MK9 Bruen LMG, create insane new hybrid blueprint weapons with the update to Gunsmith, get on the path to earn a Mastery camo, experience close quarters action in the return of the ‘Shoot the Ship’ playlist, level up with a Double XP, Double Weapon XP, and Double Tier Progression earn rate,  and more!

This is not an in-game screenshot, it simply demonstrates how you can build a custom hybrid weapon from your available blueprints.

Add some more firepower to your arsenal with the MK9 Bruen LMG. This high accuracy and reliable damage weapon can be acquired via the ‘Encryption’ bundle or by completing a challenge found in the Weapons menu. Head to the LMG tab to find LMG Foxtrot and complete the associated challenge to earn the weapon or get the Legendary ‘The Glitch’ blueprint in the ‘Encryption’ bundle in the Store. 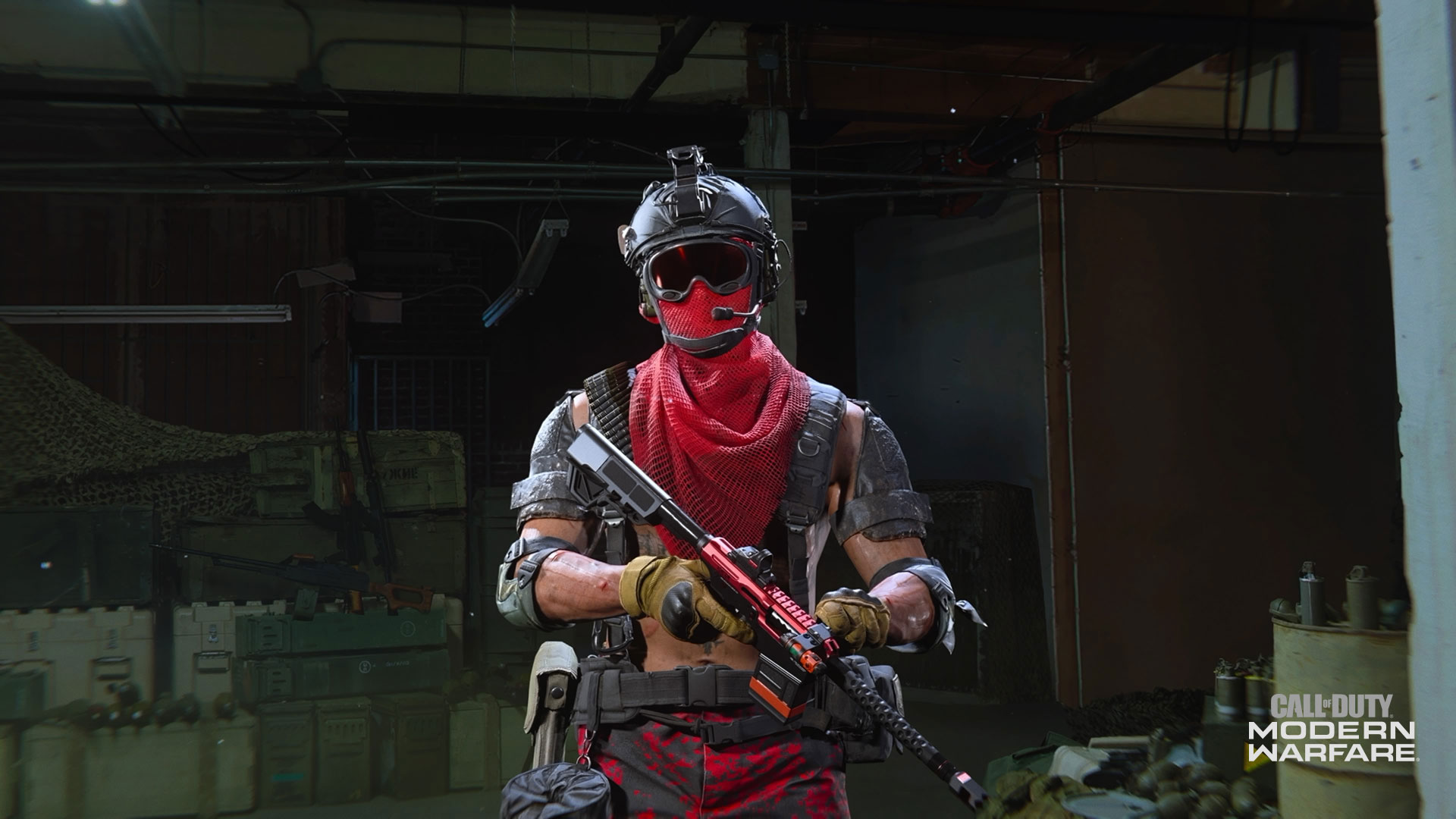 Get some goods that you can claim as “fire” in the Pyromaniac bundle. This bundle includes a Legendary ‘Firestarter’ skin for Krueger, the fiery Caldera Legendary blueprint, a new Finishing Move, flaming Throwing Knives to swap out your standard lethal equipment, and more. Get the bundle for Modern Warfare including Warzone in the Store, then flame out your enemies. 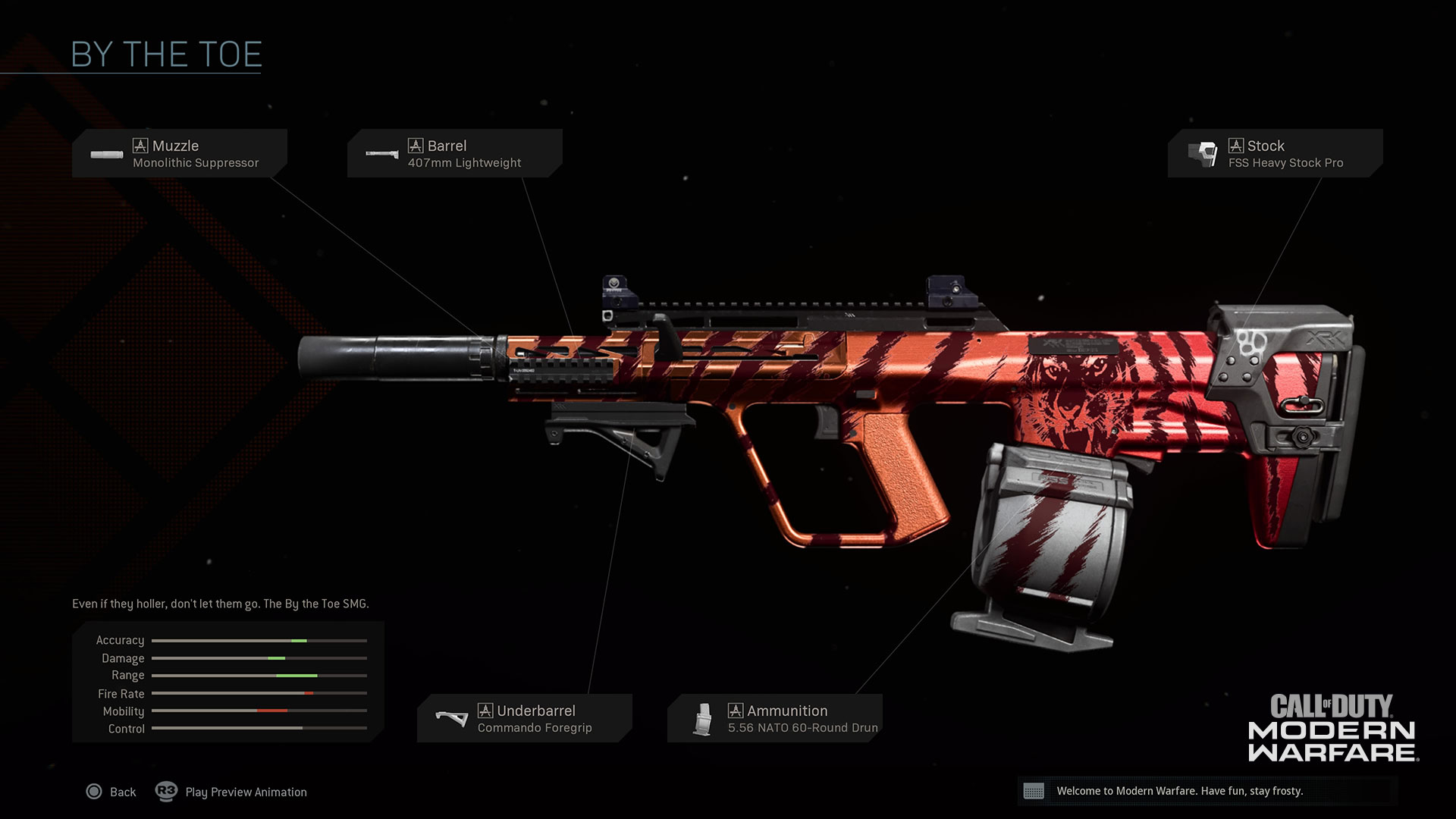 Find the ‘Fire Claw III’ bundle in Store this week. The Legendary SMG ‘By the Toe’ is a striped masterpiece that’s highly capable in taking out your enemies. The bundle is complete with a crown themed spray and tiger themed charm, so you’ll have the look to claw your way through the competition. Look for the ‘Fire Claw III’ bundle later this week.

Show off your skills by earning the Obsidian camo – a true sign of mastery. This prized camo will be a challenge to earn but equip it in battle and your enemies will know an elite Tier One Operator is fighting on the other side. Get the details and tips on how to earn Obsidian for all your weapons this week on the Games Blog. 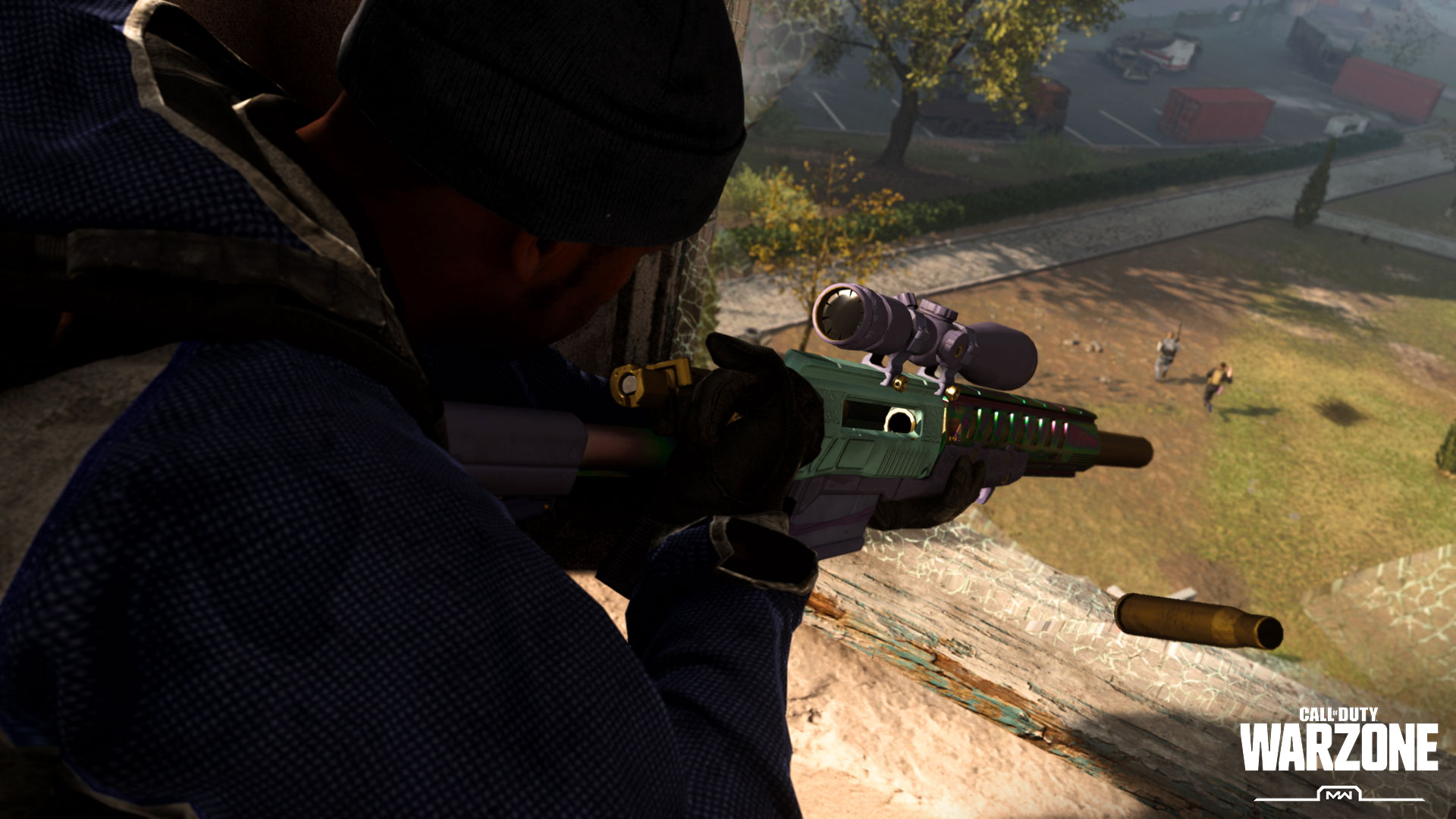 A new Contract has been added to Warzone – Most Wanted. Make yourself a Bounty Target for all teams in Verdansk when you activate this Contract and survive to get the ultimate reward – a redeployment for all of your fallen teammates. Learn some tips to master this Contract and what it means to be Most Wanted this week on the Games Blog. Pick up this Contract in a game of Battle Royale (Solos, Trios, or Quads) or Plunder Trios this week! 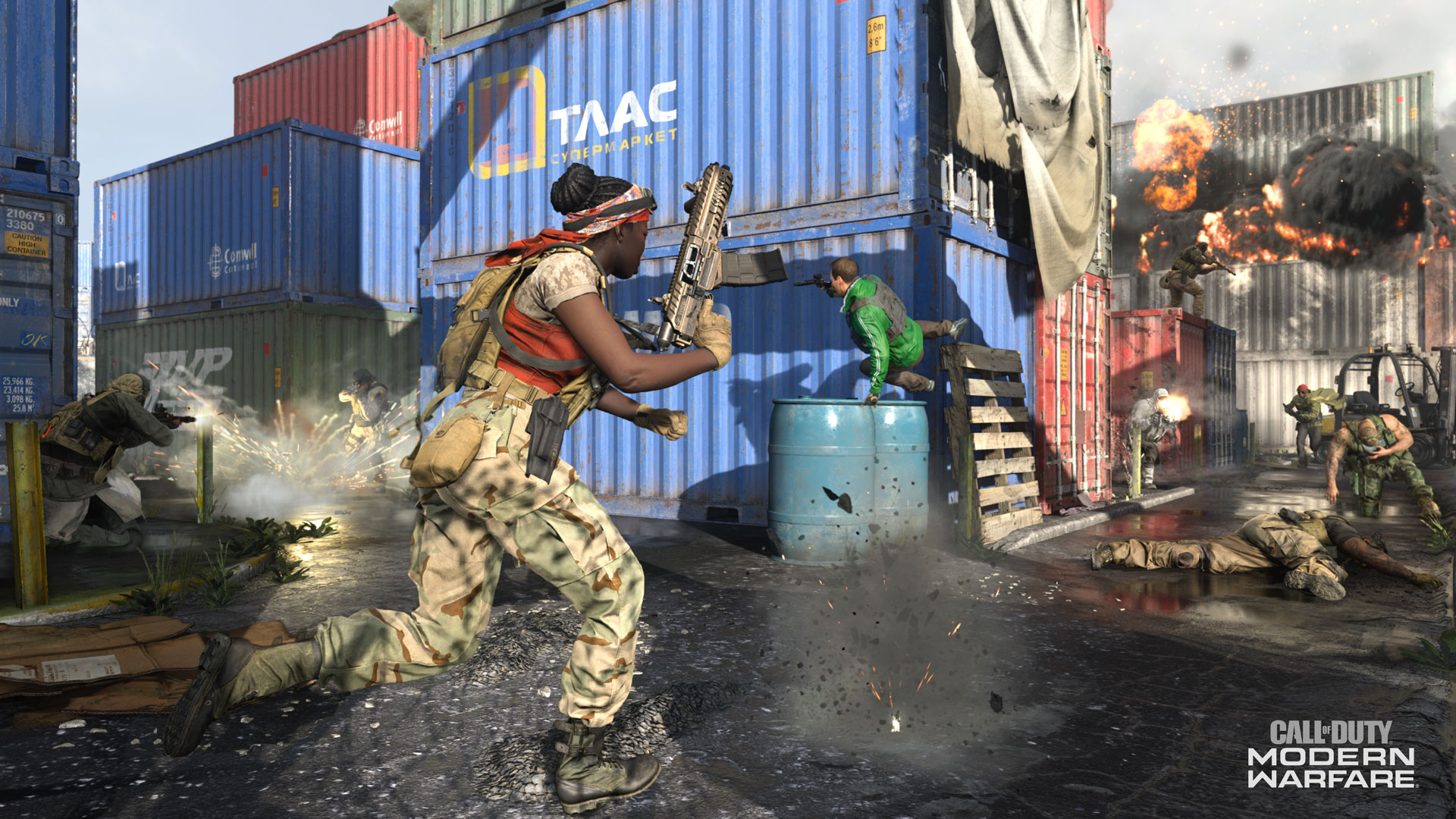 Level up and progress through the Battle Pass System this weekend with Double XP, Double Weapon XP, and Double Battle Pass Tier Progression earn rate. Jump into any playlist available in Modern Warfare includingWarzone starting on May 1 at 10 AM PT until May 4 at 10AM PT.

We’re back this week with more intense competitions in Verdansk. From CDL pro hosted events, charity tournaments, international battles, and more. There’s a lot you can watch this week #LiveFromWarzone. Get a full look at the schedule below: 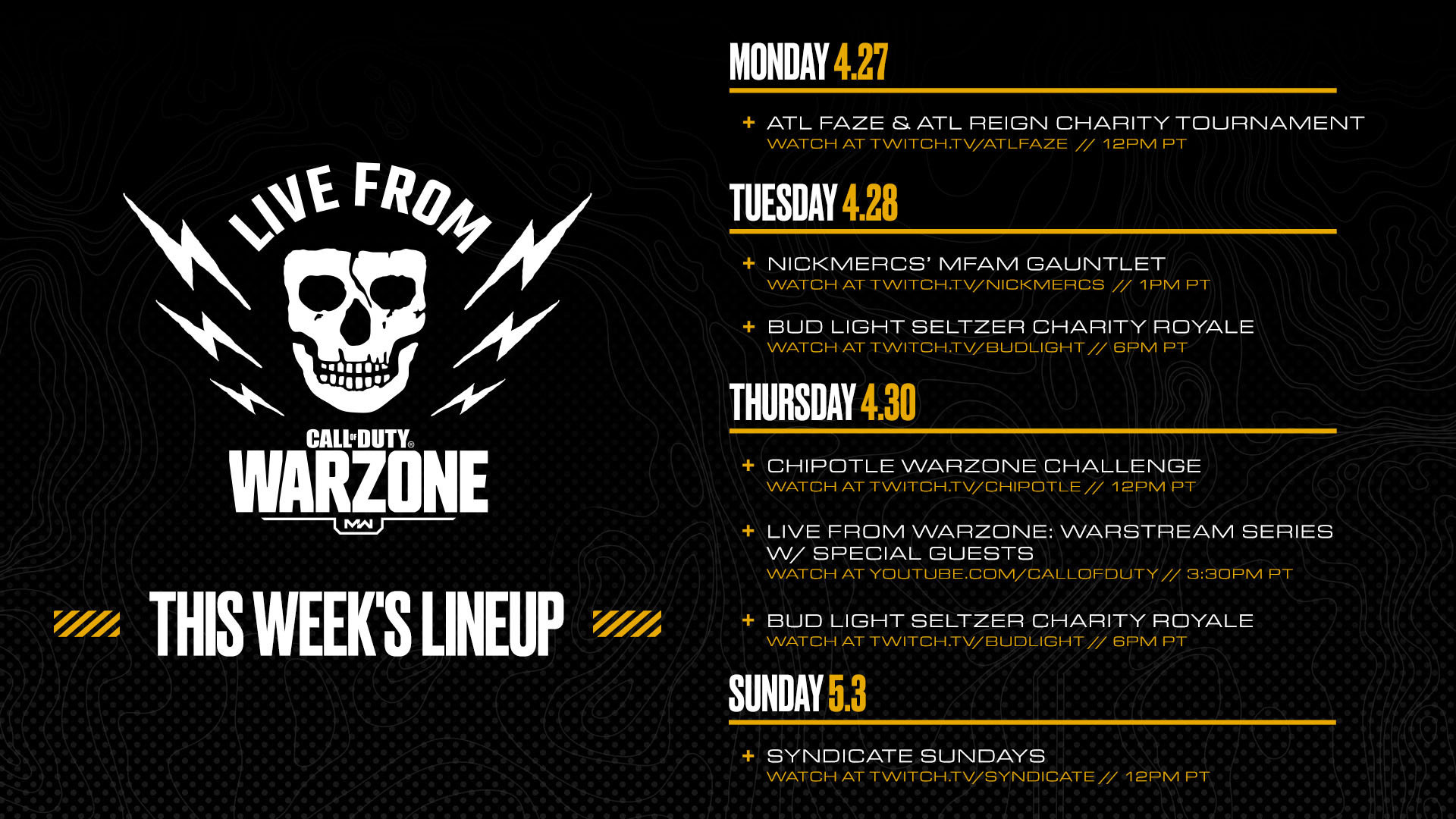 Tune in today at 3PM ET for an Atlanta FaZe hosted tournament to see some of the best in CDL bring the heat to Verdansk. Get more intel on the Call of Duty League™ in Verdansk and in other events in the Call of Duty League section below. And check out all the happenings streaming #LivefromWarzone to see the some of the best battle it out, learn new strategies, tips, and maybe pick up a few tricks to help you survive the Gulag.

This week a Call of Duty: Mobile esports event kicks off, the last few days of the RC Shock Challenge (available to earn free in the Battle Pass), you can get more rewards through weekly and daily challenges and Ranked Mode for Multiplayer and Battle Royale, and finish your Battle Pass tiers now before the next season begins.

Rust returns and kicks off a wild, wild western-themed upcoming season. Log on and play Rust now, a fan favorite map that originated in Call of Duty®: Modern Warfare® 2. Featuring both close quarters engagements and various points of verticality, Rust gives all players opportunity to shine regardless of their loadout and playstyle. Jump in now to experience this classic map!

Starting on April 30, Call of Duty: Mobile kicks off the Call of Duty®: Mobile World Championship 2020 Tournament in collaboration with Sony Mobile. Get the details on this esports tournament and information on eligibility requirements here.

Available to earn free at Tier 25 in the Battle Pass, players can get the Shock RC Killstreak. Using this nimble Killstreak complete tasks for the Shock RC Mission to earn rewards including XP and Weapon XP cards. This mission and the rewards you can earn from it are only available for a limited time, so jump in now to start earning the goods.

Rank up and get rewarded by playing Ranked Mode for Multiplayer and Battle Royale. Each Seasonal Rank nets you distinct rewards and a chance to play against other ranked players. Head to the Ranked Mode lobby to preview the rewards you can earn, and level up your rank to earn a distinct Ruin operator and weapon. 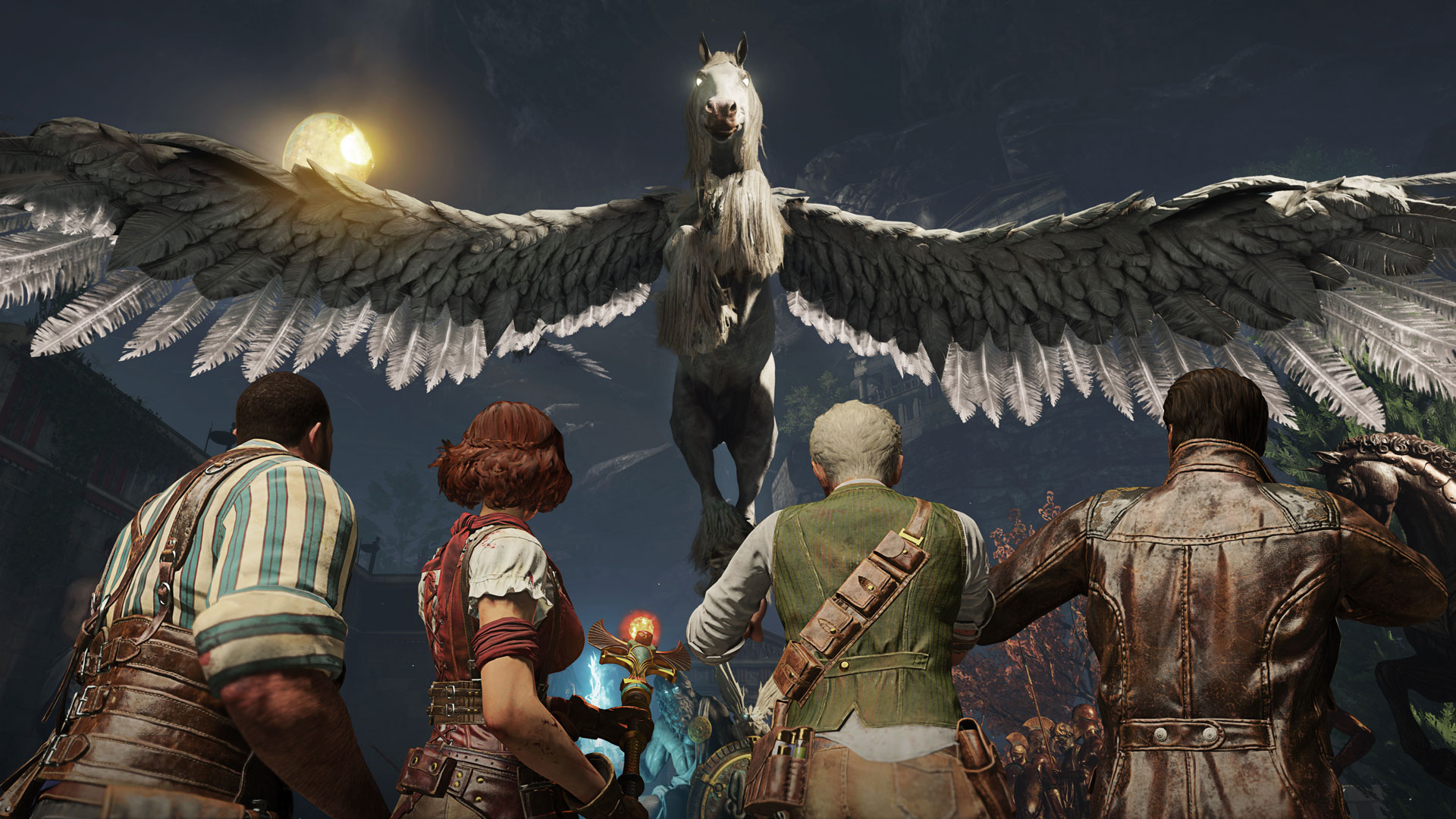 Take your game Hardcore in the 2XP Hardcore Barebones Moshpit playlist this week, featuring no Specialists and no health regeneration in an intense, high-damage battle for double the XP. And starting on April 30, get 2XP in Multiplayer in Zombies as well as 2X Nebulium Plasma in Zombies through May 7! Take a look at this week’s playlist updates kicking off on April 28:

The Chicago Huntsmen series featured several of the league’s top teams in action. The Dallas Empire emerged as champs on CDL Sunday. Didn’t catch the action? Get a replay of this epic event here on the Call of Duty League YouTube channel and check out the updated standings here.

First watch the Atlanta FaZe hosted tournament today at 3 ET. Tune into the Call of Duty League Twitter for updates on where to watch.  Plus, the Warstream returns this Thursday, April 30! During the stream CDL players storm Verdansk where the pros fight to take their squad to the final collapse and claim victory. The Minnesota RØKKR start off the action at 3:00PM PT and play until 4:30PM PT. Afterwards the Dallas Empire will get in on the action starting at 5:00PM PT until 6:30 PM PT. Both teams will be scored and evaluated during the matches. At the end, the team with the most points will be crowned the champion. Be on the lookout for pros from both teams in the Warstream alongside some surprise special guests!

Watch the Warstream on the COD League Youtube channel to see who comes out on top.

Get more on the Games Blog this week including tips to earning the MK9 Bruen LMG, the Obsidian camo, and more.