Greetings Call of Duty: Mobile Community! We are nearing the end of our Anniversary Season and that means it is finally about that time that we start talking about, and of course teasing, Season 12 😉. Speaking of which, our first teaser was released a few days ago and here is the first look at the next Multiplayer map coming to Call of Duty: Mobile. 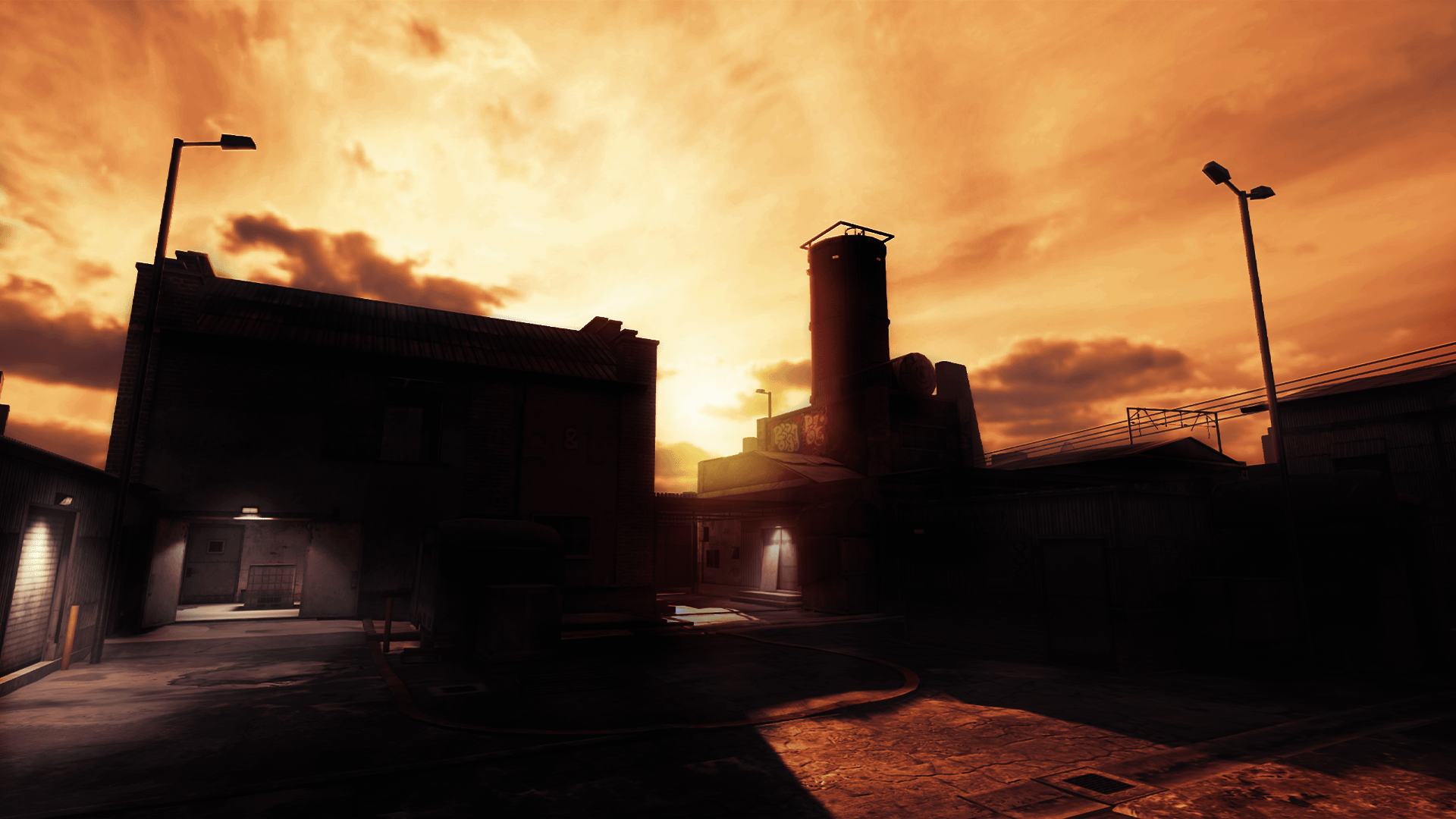 We’ll have more to share around Season 12 starting tomorrow and make sure to keep an eye on our global YouTube channel. We are always trying to do new and interesting approaches to sharing content for the first time, or teasing it, and our teams have made something truly special for this. We hope you love it and we look forward to seeing more discussions and speculation about this next teaser.

As per usual for an end of season community update, we are going to keep it light but we know there is something important on everyone’s mind: bug fixes, stability, and improvements. To that end, that will be our first and largest topic of discussion in this update. However, first get a look at the main events still running and a few brand-new ones that just released.

Here is a quick look at all of the new events starting today and a few others already running:

One final reminder that if you are missing any new perks, new items, or anything else from the Seasonal Challenges make sure to go complete those now before S12 arrives. There is a lot to grab there, as per usual, and many of those items may not return or it just may be a long time until they come back in a different form (like through the Credit Store).

Improving Call of Duty: Mobile
To follow-up on recent community updates and posts, we are working on a wide variety of bug fixes, performance improvements, and stability implementations. Since the last major update we’ve released a variety of different fixes and improvements, some of which were included in that update while others came through hotfixes later on. Although, many of those fixes or changes are may not always be noticeable in the day to day experience of playing, there are still a great a many of them and here are just a few that we’ve released in or since the last update:

Additionally, there is still plenty more coming. Below is a list of current issues we are either working on, or already have a fix planned in future updates:

Please note that some fixes may take longer than others, but we’re on it and prioritizing as quickly as possible. The overheating issue was a great example of something that required an immediate fix, because it affected players on the most severe level by stopping them from being able to play the game at all.

We’ve had several large new content updates in the past months, which is great from a content perspective but also has the potential to introduce issues. We’re very excited about our next two content updates, which are going to be fantastic and really fun, but we’re also taking this as a learning lesson to ensure we maintain a massive focus on balancing, improvements, fixes, and optimizations. We aim to minimize the risk of bugs and deliver the polish we all expect.

Cliffhanger Event
We always like to leave end our seasons with a few extra ways to acquire more gear while tackling new challenges. To fulfill that goal this season, we have the Cliffhanger Event! This one is primarily tied to the new Capture and Hold playlist (featuring the modes CTF, Domination, Hardpoint, and Headquarters) and asks you to play matches, take out enemies, and complete objectives. 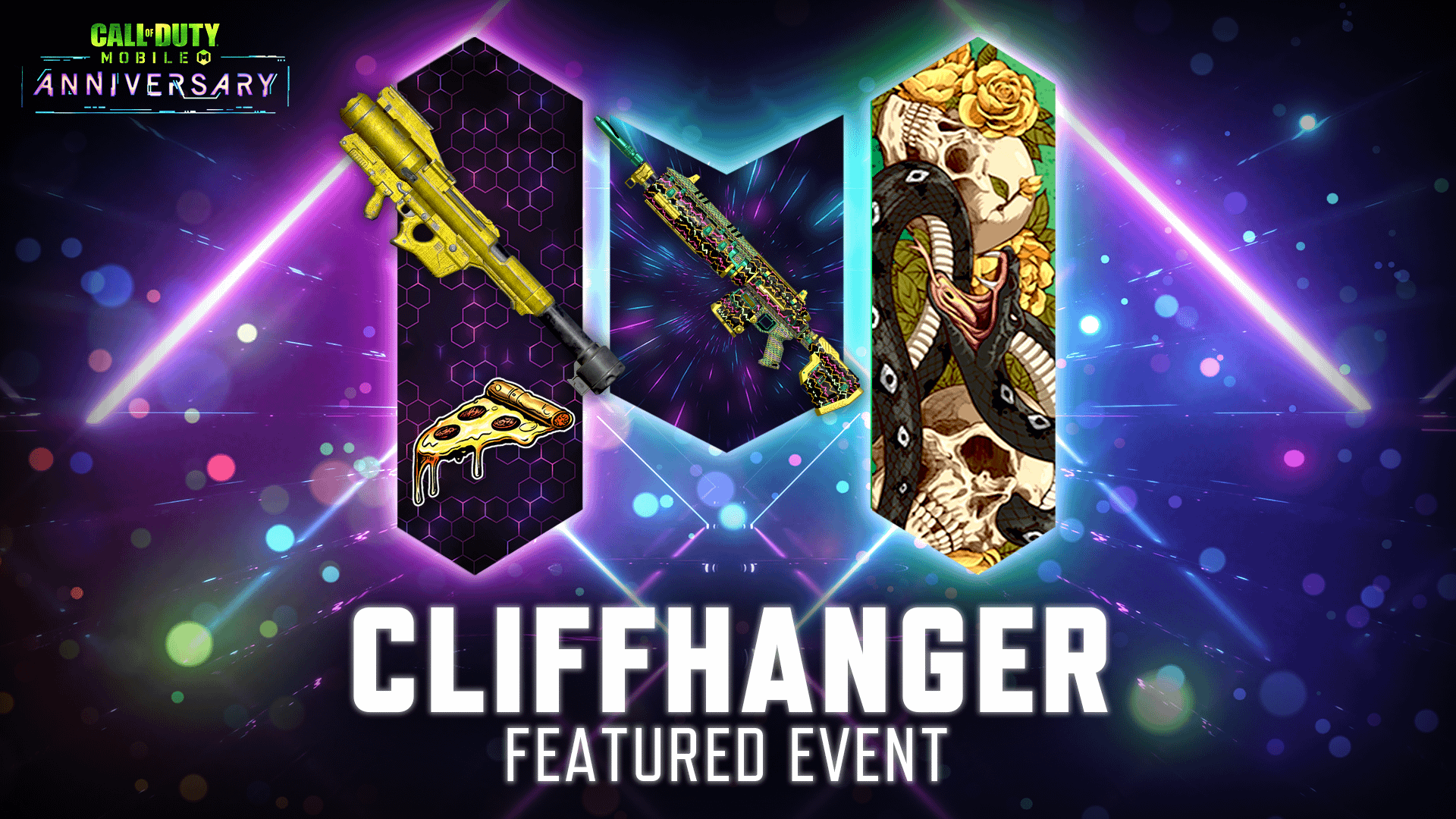 You’ve got just around a week to complete this event, so jump into that new Multiplayer playlist, dominate in objective based modes, and grab it all before it is gone.

Ascended Mythic Drop
The first Mythic weapon in Call of Duty: Mobile is finally here and part of the Ascended Mythic Drop. This cosmetic only Drop released yesterday alongside the previously mentioned new events and playlists, and the easiest way to think of it is as something similar to a Lucky Draw but re-designed for this first Mythic item. Just like a Lucky Draw you can check out the odds in-game and each Drop you buy will get you one of the items at random.

So far, all normal right? Well, the unique part of the Ascended Mythic Drop and the Fennec – Ascended is that it also has its own customizations after you acquire it. It is similar to getting one of those high-quality legendary weapon blueprints from a lucky draw, except now it has an array of additional unlocks you can purchase that provide unique customization options. Take a look at some of those cosmetics:

For this second part, you have a leveling system to progress through with Mythic Cards (similar to XP cards but specific to this system and premium only) and each new level brings new unlocks. By the way, those Mythic Cards will applicable to all Mythic items in the future too, not just this one.

Leveling up the Fennec – Ascended brings unique cosmetic versions of attachments, death effects, muzzle flashes, stickers, and charms. This is all compatible with any attachments you already have unlocked for your Fennec weapon type in Gunsmith. 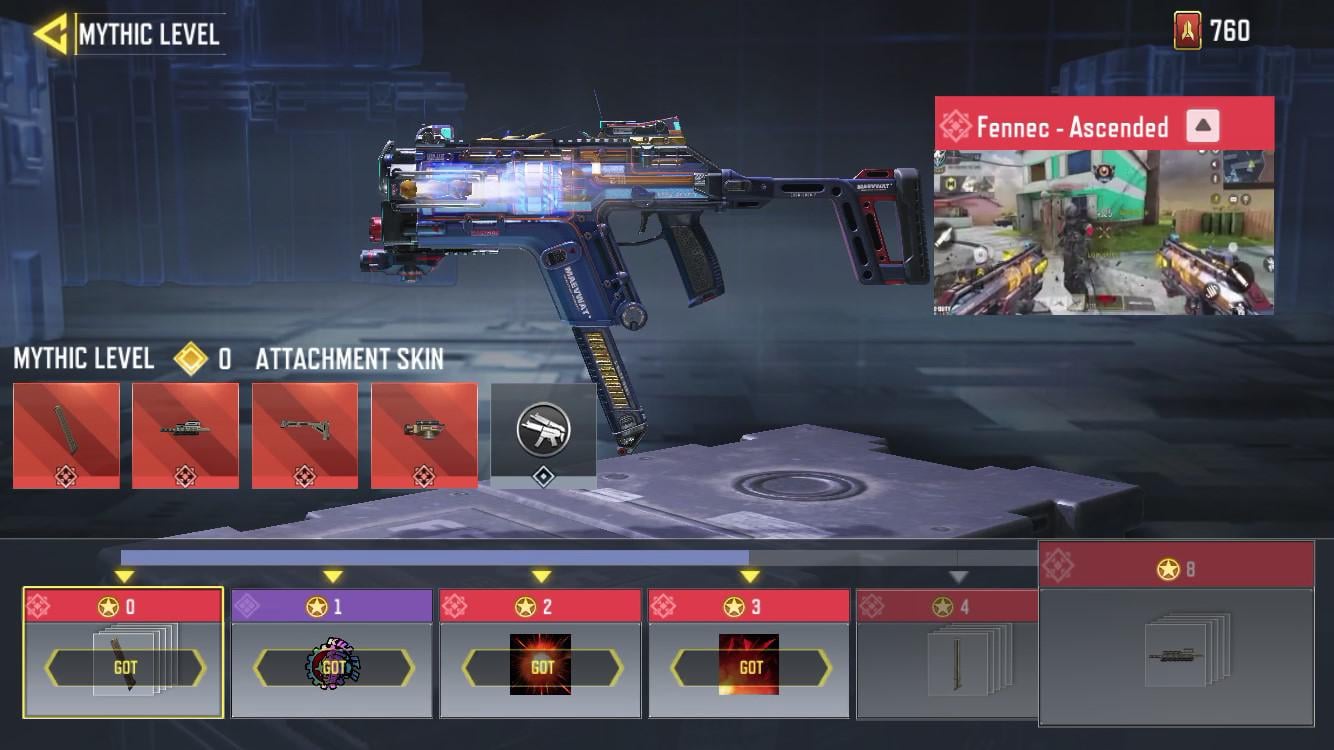 This whole offering for the Fennec – Ascended is meant for those who want to truly deck out and customize an extremely high-quality cosmetic weapon. We’ll keep an eye out for feedback and if you have any follow up questions about how it all works feel free to reach out.

Feedback
We have only a few topics to bring up this week and we hope to keep it relatively light as the last update of Season 12, but most of the feedback we’ve seen in the last week was bug report related or about these two topics below.

Fake CP Websites or Services
A few people from different communities had reached out recently to inquire about websites, services, Discord groups, or other places selling COD Points (CP). It is extremely unlikely that anything outside of the game or a 1st party partner, like Google or Apple, selling CP is legitimate. In some cases we are can try to proactively go after these fake websites or groups scamming players, but they are easily made and they prey on people with too good to be true offers of discounted CP.

The best thing to do and the best thing we can suggest is, be wary, be cautious, and do not trust these offers by default. You can always reach out to other community members or our official channels to see if these are legitimate, but just keep in mind that discounted CP just by itself isn’t something normally offered. Be smart and protect yourself from these scams.

Halloween Events
Throughout the last two-three weeks we had a variety of events focused around bringing the fun and unique aspects of Halloween to Call of Duty: Mobile. The main events were Pumpkin Confirmed, Attack of the Undead, Halloween Standoff, and Undead Fog. First off, thank you to every single person out there who took the time to give feedback on these events and in ways that were more eloquent than “it was great” or “it was bad”.

Pumpkin Confirmed, Attack of the Undead, and Halloween Standoff all proved to be popular and generally well-liked, but Undead Fog was far more contentious. Some players appreciated the light approach to zombies where they didn’t significantly impact gameplay or distract you from fighting your enemies, while others had much grander desires for this mode.

We know some people were giving a mixture of feedback that was specific to this mode but also just asking it to be entirely something else, ZOMBIES mode. We did our best to make sure no one thought it would be a return of that mode, but we also appreciate the feedback mixed in there (even criticism) about how to make something like Undead Fog feel more unique. Halloween 2021 feels inexplicably far away, but your voices matter and we’ll see what fright-filled adventures we can come up with next time.

Final Notes
The next season is finally almost here and that means we are going to expect a flurry of comments and inquiries asking what is releasing there. For now, the only information we are willing to tease here is that that this season is going back to a more military focused theme, there are two new weapons this season, and the sun seems to be getting real low in the world of Call of Duty: Mobile. Related to all of that, here is picture of Summit 😉. 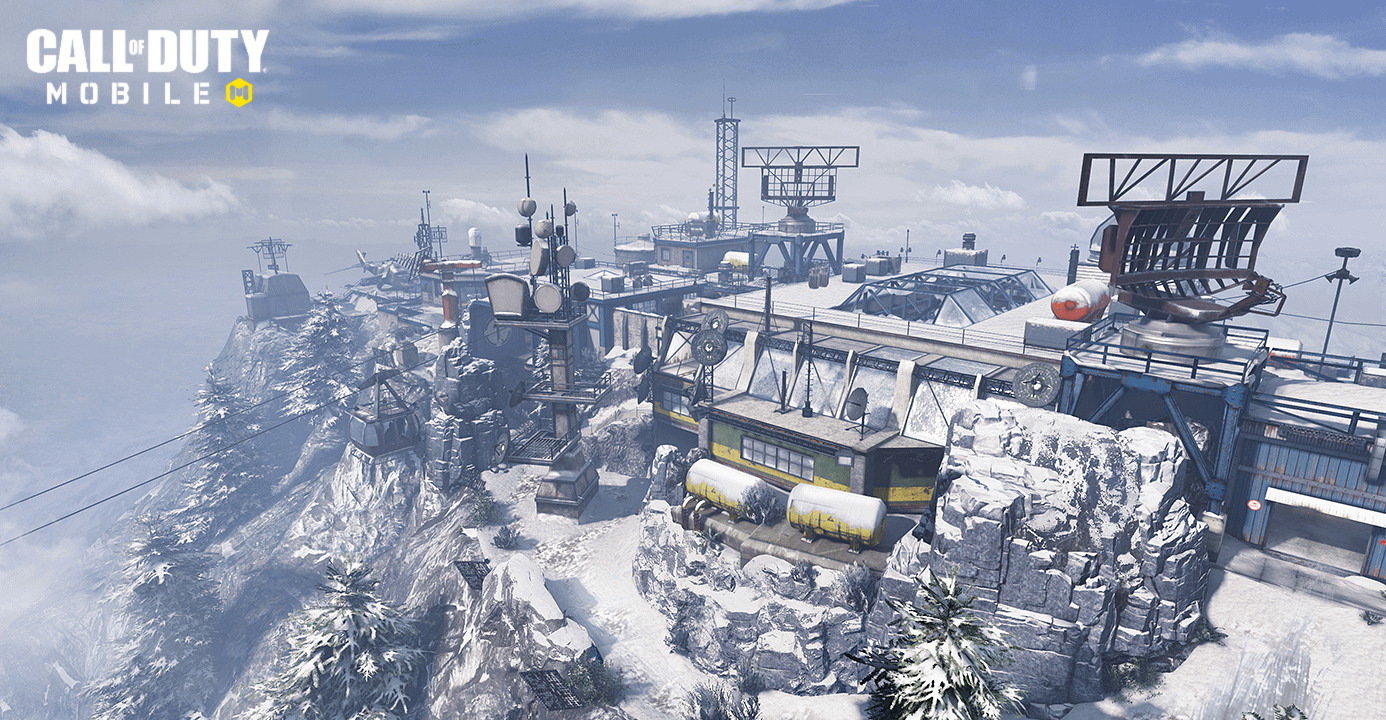 We’ll see you next week or on our social media channels before then as we slowly release more and more information about Season 12. See you there and make sure to check in tomorrow to see what unusual events we have going on. Stay safe out there everyone!

– The Call of Duty: Mobile Team